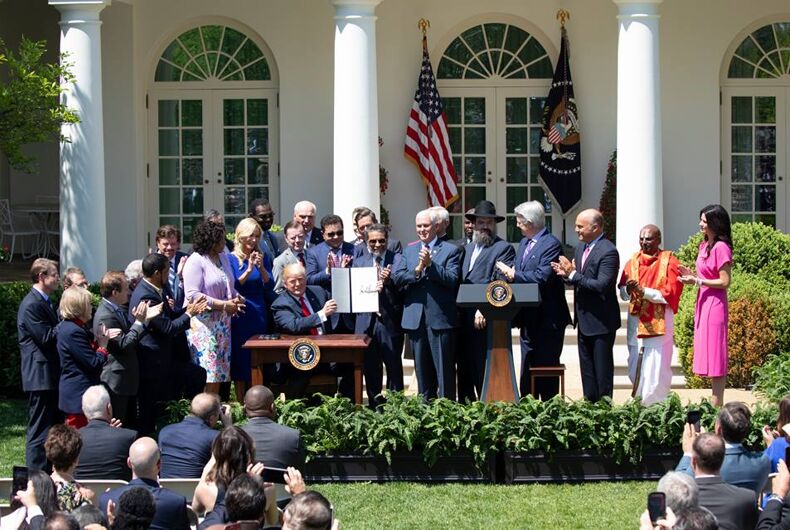 Say this much for Donald Trump: he rewards loyalty. On Thursday, Trump signed an executive order creating a new “White House Faith and Opportunity Initiative,” which has carte blanche to give the religious right anything it wants.

Surrounded by representatives from a range of denominatoins at a ceremony in the White House Rose Garden, Trump promised that he will “always protect religious liberty.”

Trump began his remarks by saying that “we condemn all crimes against people of faith.” (Except Muslims, of course, which he has encouraged.) He also took credit for anyone saying “Merry Christmas” more often now that he’s president.

The initiative is payback in particular to conservative evangelicals, the group of voters most loyal to Trump. The new office essentially guarantees that religious groups (or perhaps more accurately, certain religious groups) have access to government funding, in the words of one White House official, “without all of these arbitrary concerns as to what is appropriate.”

However, as with so much else with Trump, the scandals keep overshadowing the damaging policy changes that his administration is implementing. The new initiative is particularly destructive when it comes to LGBTQ rights. While past administrations, including President Obama’s, had faith-based initiatives, Trump’s goes much further in aligning the government with religious groups.

Unlike the initiatives launched by Obama and George W. Bush, this initiative does more than encourage the government to partner with faith-based groups where appropriate. Trump’s executive order throws the entire force of the federal government on the side of the religious right.

“All executive departments and agencies shall, to the greatest extent practicable and to the extent permitted by law, respect and protect the freedom of persons and organizations to engage in religious and political speech,” the order reads.

Even more importantly, the order explictly calls out the code words that the religious right uses to justify its objection to LGBTQ rights, requiring the Attorney General “to issue guidance interpreting religious liberty protections in Federal law.”

It doesn’t take a genius to figure out where Jeff Sessions is going to land on that issue. The Justice Department has already sided against LGBTQ rights multiple times, especially when it comes to marriage equality.

No wonder that leading anti-LGBTQ leaders are over the moon with the executive order.

Tony Perkins of the hate group Family Research Council lauded the executive order for “further restoring the nation’s First Freedom of religious liberty.” Franklin Graham professed himself “extremely grateful,” while Johnnie Moore, a member of Trump’s religious advisory group, said that the initiative is “the product of the President’s unwavering prioritization of faith and religious liberty.”

The mainstream media will go back to their focus on the Russia investigation and Trump’s extramarital proclivities. Those are important stories.

But it’s actions like the executive order that are reshaping how the federal government treats LGBTQ citizens. That has an impact far beyond Trump’s scandals and may well be Trump’s biggest legacy.