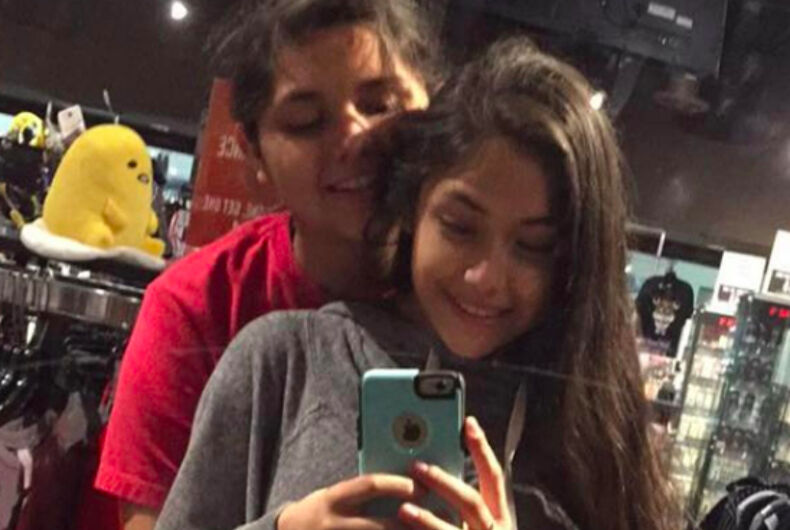 We’re seeing some cute prom photos this year — girls with girls, boys with boys and LGBTQ students included like never before.

But not so in Tyler, Texas, at John Tyler High School.

The east-Texas school had given a lesbian student permission to bring her date to the May 5 prom. Senior Merary Melchor was taking her girlfriend of two and a half years, Sydney Aparicio, a freshman at cross-town Robert E. Lee High School.

Excited to go, Melchor said, she pulled together the money to invest in a dress.

“I was just really excited that it really fit me very well,” she told KETK TV. “And it’s beautiful. It kind of expresses more of me into the dress.”

But then — twice — the school refused to give the girls the tickets to go. The reasons cited?

They missed a deadline — they hadn’t. And the threat of a gang fight — huh?

“They said, oh, no, she’s more than welcome to find somebody else to go with.”

This prom discrimination follows other educational controversy in the city. Last fall, after years of frustration, a local group petitioned the Tyler Independent School District to change the name of cross-town Robert E. Lee High School.

African-American residents are especially frustrated with the school’s namesake, the slave-holding Southern general. The Tyler federal judge who integrated its schools 50 years ago, William Wayne Justice, had been concerned about the name even back then, according to a local news site, the Tyler Loop. Then and now, the school board has resisted change.

(By the way, the John Tyler High School namesake has its own unsure footing. The school is named for the little-known 10th U.S. president who advocated for annexation of the Texas Republic. He was later elected to the Confederate congress.)

“We struggled a lot just to scrape up all the money we could to get everything we have,” Aparicio said. “It’s highly upsetting to me.”

‘Execute the gays’ minister is hosting a Bible conference in DC