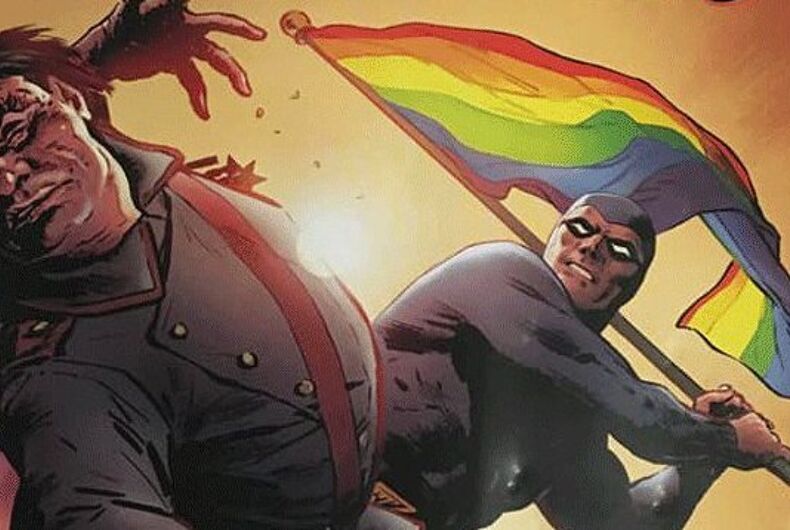 A comic-book superhero has ignited a Pride feud between Sweden and Poland.

In the Swedish edition of the Phantom comic book, the hero Fantomen uses a Pride flag to strike at homophobes in Poland, on both the cover and on inside panels.

The scene? A Pride celebration in Poland. The plot? A group of ultra-nationalist protesters, in gray uniforms, descends on the parade with homophobic chants and Polish flags.

“I have to act quickly before blood flows on the streets!” Fantoman says as he takes a rainbow flag on pole as his weapon.

The Phantom began as an American adventure comic strip in 1936. Writing this current Swedish edition was Warsaw-based Phillip Madden. It reflected actual events in Poland, he said, and he directed its message against homophobia in the country.

“I thought it became a nice symbolism with the colorful flag, which stands for tolerance, against the colorless gray dressed villain who stands for intolerance,” Sol told the newspaper Expressen.

“I understand clearly that the cover is controversial, but sometimes you have to feel comfortable and stand safe in your choice.”

Some folks in Poland, however, are not pleased. Conservative broadcaster Telewizja Republika criticized its European neighbor.

“Sweden is once again being ridiculed for its attempt to be the vanguard of the global social-justice movement,” the broadcaster said. It illustrated its own Captain Sweden caricature to replace Fantomen.

“Last year, the Equality Parade was stopped by Polish nationalists for half an hour, so this picture shows real life in our country,” Kwiecinski said. “I know its a bit controversial. It’s a bit brutal, but it really pleased my eyes for being honest.”

Kwiecinski’s employer punished him after he and his boyfriend were featured in a series of lighthearted vacation videos. He was reassigned and eventually released for being gay.

“In real life we cannot wait for a superhero who will come and save us,” Kwiecinski said. “We need to fight on our own, and LGBT people in Poland are extremely brave.

“I know hundreds of faces of Polish activists who could be on this picture instead of Fantom.”