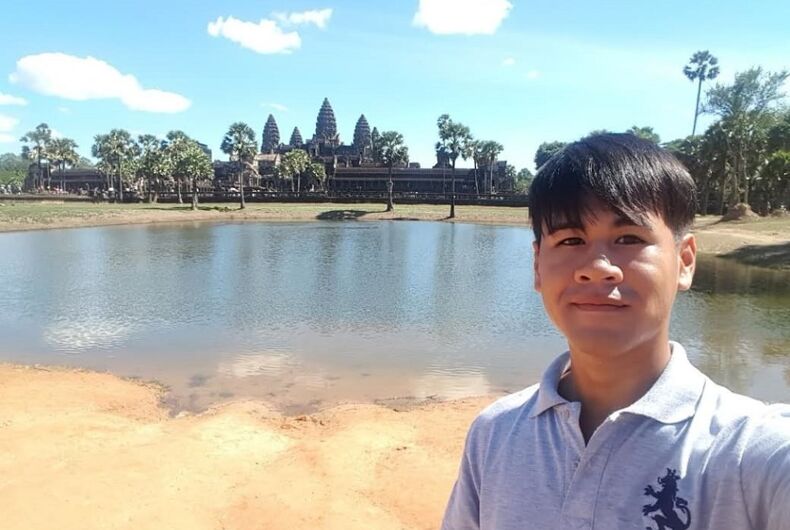 Several gay men are coming forward saying that the Peace Corps fired them for testing positive for HIV.

The Peace Corps’s official policy is to decide how to handle volunteers who test positive on a case-by-case basis.

Some volunteers, though, are saying that they were terminated even though available treatments meant that they could continue to work.

Romany Tin, who was assigned to teach English in Cambodia, started feeling sick in January. After some blood tests, he was diagnosed with HIV.

Tin was flown to D.C. and, after a month of treatment, his viral load was undetectable. But he was told that he would have to wait three to six months to reapply to work in another country – without his stipend – since Cambodia was not on the approved list of countries for people living with HIV.

“They’re such a progressive organization, but their stigma and knowledge of HIV and how to treat it is very backwards,” said Tin. “I feel very mistreated. I feel angry.”

He wrote a letter to the Peace Corps asking to continue his service, but in March he was terminated.

“I feel completely healthy, mentally and physically. They know that. I could have returned to service.”

Another gay man, only identified as “M.” by Buzzfeed, was working in southeast Asia and was denied PrEP by a Peace Corps doctor because he had not yet had unprotected sex in the country.

When he was diagnosed with HIV, he was given a week to say goodbye because the Peace Corps was worried that negative attitudes towards HIV in his host country could get the program shut down if people found out a volunteer was HIV-positive.

Both M. and Tin received letters from the Peace Corps that said, “This condition limits your ability to perform your Volunteer assignment and has the very real potential for further aggravation during the remainder of your Peace Corps service.”

Two volunteers in Ukraine also talked about how they were denied PrEP by the Peace Corps. “Jeremiah” was given a form to fill out when he asked a Peace Corps doctor for PrEP, and was told that even though he was sexually active and has engaged in unprotected sex that he was not at high enough risk to justify PrEP.

Several months later he visited another doctor and lied on the form. While he eventually got PrEP, he had to listen to the doctor read a letter that said that he was violating his Peace Corps contract by having unprotected sex, which put him at risk for termination.

“I think LGBT health in the Peace Corps is almost nonexistent,” he said.

James Fishon is a volunteer with a similar experience. He was working in Ukraine for a program for kids with HIV.

Fishon also asked a Peace Corps doctor about PrEP, but was told that his sexual behavior wasn’t risky enough even though he had already contracted an STI and had sex without condoms – the CDC recommends PrEP for people with these sorts of risk factors.

He did not contract HIV in Ukraine, but he was attacked by two men in the street who knew he was gay. The Peace Corps sent him back to the U.S. after the attack.

“I am so disappointed in the Peace Corps because I feel like they dropped the ball every step of the way,” he said. “They talk about being an organization that wants to be diverse and inclusive — and they like that on the surface — but the fact of the matter is they don’t have the structure in place to protect those people.”

“We are concerned that the Peace Corps’ policy pertaining to volunteers diagnosed with HIV is arbitrary, not grounded in evidence, and being implemented without critical attention to the well-being of the volunteers,” said the Treatment Action Group in a letter to the Peace Corps on Tin’s behalf.

“In practice, these policies mean that volunteers who make the health-conscious decision to get tested for HIV — a practice the Peace Corps should encourage — are, in effect, punished if they test positive.”