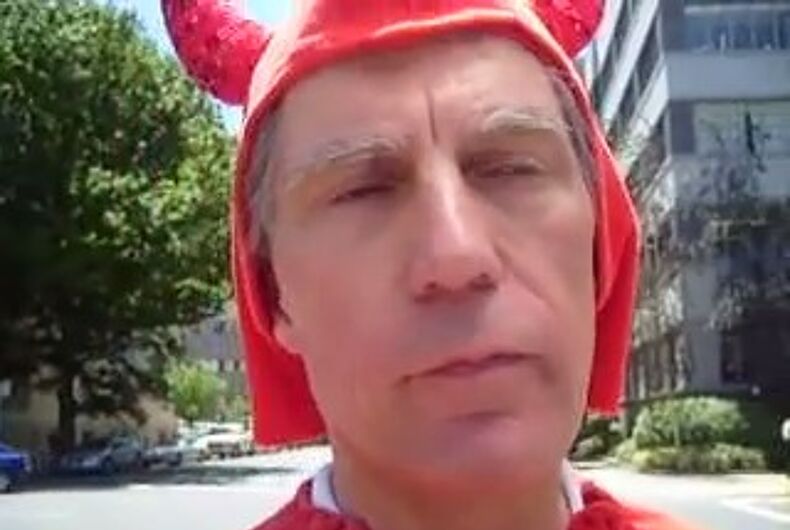 Can there be any bigger exercise in futility than being a homophobic candidate in a deep blue state? Don Grundmann is about to find out. Grundmann is running for the U.S. Senate in California on an unabashedly anti-LGBTQ platform.

Grundmann, a 66-year-old chiropractor, has a long rant in the California voter guide focused entirely on trashing transgender rights.

“There is no such thing as ‘transgender,'” Grundmann writes. “It does not exist. What does exist are broken people who pretend to be the opposite sex and even mutilate themselves in the attempt. ”

From there, Grundmann goes on to say that “there is a massive Social Engineering campaign to normalize the soul pathology and social sickness of ‘transgenderism.’ So-called ‘transgender’ children are being used as weapons to attack and destroy normal/healthy children.”

Grundmann’s website features the Vanity Fair cover with Caitlin Jenner under the headline “They will start recruiting your children in kindergarten” and complains about the “degeneration and death of American masculinity.” It also offers advice from “A white guy to black Americans–you are CHUMPS,” illustrated with a photo of lynching victims.

Grundmann has been knocking around California politics for a while as a leading figure in the far-right American Independent Party. His idea of furthering his views is to dress as the devil to protest public schools.

Unfortunately, his party is now the third largest in California because people registering to vote confuse selecting it on registration cards with actually registering as independent.

Grundmann’s political views have always been, to put it generously, crackpot.

As a Congressional candidate in 2000, he insisted that AIDS was government-engineered biological warfare. Among other ideas, he wants to abolish the IRS and ban childhood vaccinations. He’s a perennial fringe candidate who just happens to lead the third largest party in the nation’s largest state.

Grundmann is joining the growing ranks of homophobic and transphobic candidates this year, which includes professional hater Scott Lively. Lively is running for governor in Massachusetts. Both Lively and Grundmann stand an equal chance of being elected.

Grundmann’s candidacy is a reminder that California was once a happy haven for homophobes. For many years, Rep. William Dannemeyer was one of the most vicious voices against LGBT rights in Congress, and the Rev. Lou Sheldon’s Traditional Values Coalition was a powerhouse in state politics.

As California has diversified, the state has increasingly abandoned its far-right legacy. The question is whether California is a bellwether for the rest of the country. If it is, then all the candidates like Grundmann elsewhere in the country may have their days numbered.

‘Execute the gays’ minister is hosting a Bible conference in DC

5 ways cannabis can change how you have sex