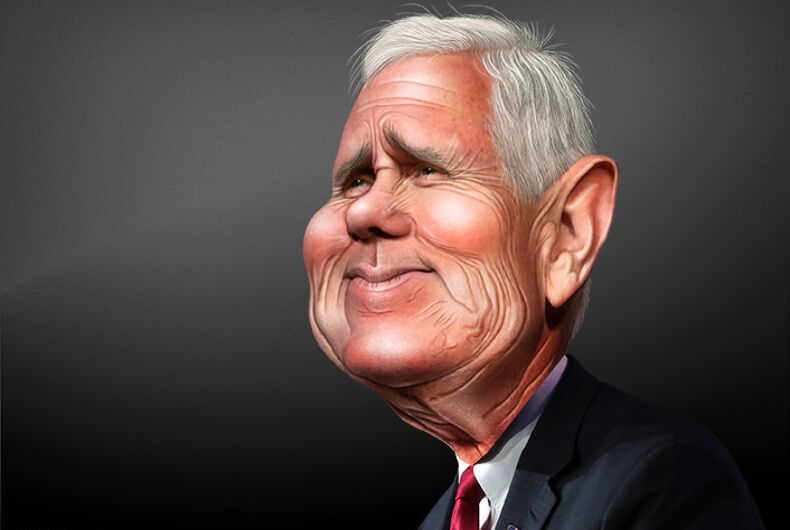 With the Trump presidency in increasing peril, it’s worth asking how bad “President Pence” could be. The answer is: pretty horrific.

Pence rocketed to national prominence when, as governor of Indiana, he signed into law the state’s “Religious Freedom Restoration Act,” which would have allowed businesses to refuse service to gay patrons based on their religious beliefs.

Following national protests, Pence signed an amended version of the law intended to provide protection for sexual orientation and gender identity. He also supported a lot of anti-gay bills in Congress.

Most recently, we learned that Pence is a hypocrite on gun issues.

Pence has an “A” rating from the NRA but won’t having firearms in the room when he’s talking.

So where else is Pence horrible on the issues?

As governor of Indiana, Pence signed one of the most restrictive abortion laws in the country, banning abortion even in cases where the fetus has a “genetic abnormality” and holding doctors legally liable if they had knowingly performed such procedures.

A federal judge blocked the law following a Supreme Court decision in a landmark abortion case.

Pence also had plans to launch a “state-run news outlet” to compete against local media services. Denounced by Democrats as a “right-wing Pravda,” the proposed agency would have featured stories and news released written by state press secretaries and targeted at small lightly staffed newspapers.

His efforts to insert morality into healthcare triggered an HIV epidemic among injection drug users in one Indiana county. Eventually, after national outcry (again), he allowed a temporary needle exchange program to help stem the epidemic, but not before publicly shaming the infected.

In Congress, Pence proposed an immigration compromise that required undocumented immigrants to “self-deport,” and provided no path to citizenship. He voted for bills allowing the detention of undocumented immigrants seeking hospital treatment. He also supported Donald Trump’s “big beautiful” wall and fought against allowing Syrian refugees to settle in Indiana.

Pence also cosponsored a bill to make English “the official language of the United States,” and require proficiency for naturalization. Mercifully, the bill died in committee.

Pence, a climate change denier, refused to comply with President Obama’s Clean Power Plan, making Indiana one of the few states to challenge its legality. He also helped kill Indiana’s successful energy efficiency program and had a 4 percent rating on the League of Conservation Voters’ National Environmental Scorecard.

The Trump administration has been the nightmare many expected it would be, but with Pence as vice president, the deplorable policies and bigotry would continue unabated.

When a Lyft driver turned hateful, two beautiful strangers made it better for this trans woman