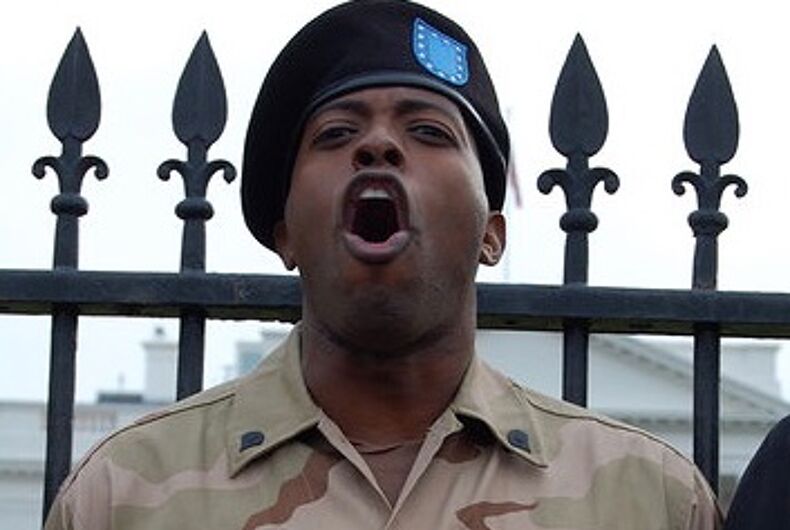 In 2010, Rob Smith was one of 13 military and civilian activists who were arrested after they chained themselves to the White House fence to protest Don’t Ask, Don’t Tell. As a gay black man who was an Army veteran with tours of duty in Kuwait and Iraq, Smith was a compelling figure.

When President Obama ended DADT, he invited Smith and other activists to witness the ceremony bringing the hated policy to an end. Smith wrote about his experiences for Queerty and even published a book about his military career.

But in an interview with the UK Daily Mail, Smith has taken up a surprising new cause. He’s decided that he’s a Republican.

Smith cites a number of factors contributing to his decision. For one, he complains that LGBTQ leaders diminished the role that radical Islam played in the Pulse nightclub massacre. For another, he dislikes what he sees as the trend for young LGBTQ people to claim victimhood status.

What apparently really sent Smith into the party’s arms, however, was Marco Rubio’s book American Dreams: Restoring Economic Opoportunity to Everyone.  What most people saw as a standard book from a presidential candidate struck Smith as a powerful statement that he found lacking in the Democratic party.

“I had never read anything or even encountered a conservative that actually had real ideas about how to change some of these systems and still help people,” Smith said.

What Smith says he’s finding among Democrats is what he calls “the outrage bear.”

“I do believe in strong borders, I do believe that we need to start having real conversations about the illegal immigration situation in this country. And when you say that, you are excommunicated. You are called a racist, you are called all sorts of different things that detract from ideas.”

In theory, of course, Smith is right. Progress doesn’t reside within a single party. However, to decide that the GOP is actually better on issues–especially the kind of issue that Smith was arrested for–takes a tremendous leap from reality.

After all, it was the current Republican president who decided to ban trans service members.

As for the outrage loop that Smith abhors–the Republican party doesn’t exactly have clean hands either. The president depends on outrage as his chief political strategy. (Smith says he didn’t vote for Trump or Clinton in 2016.)

The kind of solemn policy discussion that Smith sees in Marco Rubio is not the driving force in the GOP today. It’s Fox News, Breitbart and InfoWars.

Smith says that he’s lost friends as a result of his decision to come out as a conservative Republican. His family is none too thrilled either.

“I mean, I just talked to my mother about it last week and she says she just doesn’t understand it,” Smith told the paper.  “She literally said she’s going to come up to New York and kick my ass.”

Another sign that you should always listen to your mother.