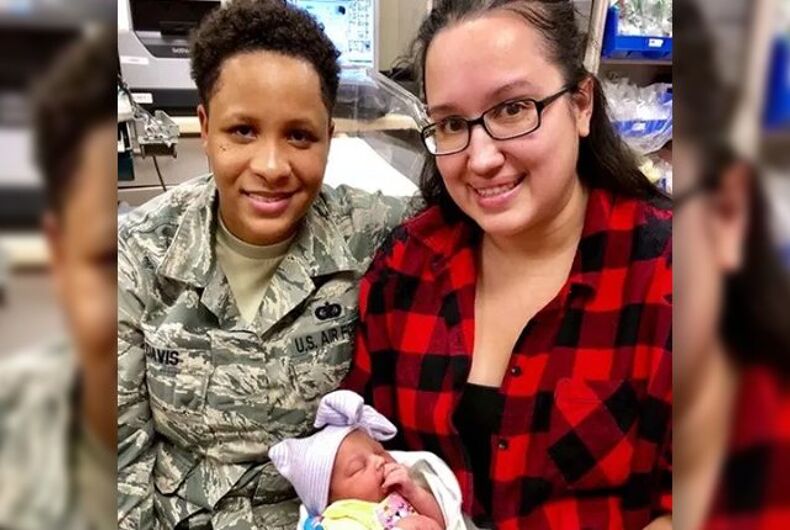 Ashley and LaNisha Davis were ready to become parents. The Mississippi Department of Child Protection Services sent them a letter confirming their new daughter had been placed in their care, the biological mother had signed over her parental rights to the couple, and adoption proceedings were started immediately.

Family and friends bought toys and clothes for the newborn. The couple visited their soon-to-be daughter and took photos together.

And then a representative from CPS called to tell them that they would not be able to take the baby home. Forrest County Youth Court Judge Mike McPhail was denying them the opportunity.

“You’re not going to get that baby,” the caseworker said with a raised voice according to Ashley.

LaNisha, however, is an active duty military member and the couple will be moving to New Mexico in May for her assignment. The CPS rule would not apply after the baby was officially adopted.

“We already told them we would stay behind until the adoption is finalized. We would do anything we need to do. We would move into an apartment in Forrest County if that’s the case,” Ashley told the Clarion Ledger.

She says the two weren’t allowed to argue their case before CPS administrators. Instead, the office stopped returning phone calls and wouldn’t meet with them at the local office.

“Everyone was ignoring us,” Ashley said. “We were waiting for over an hour, sitting in the (Forrest County CPS) office with someone who didn’t know what was going on. The social worker said she didn’t understand why and said this has never happened before.”

Mississippi’s ban on same-sex adoptions was struck down by a federal judge in 2016, saying it was unconstitutional because it “obviously targets married gay couples and limits their rights.”

In a separate case, the state supreme court ruled that Mississippi had to allow a lesbian couple to divorce. Former justice Jess Dickinson, wrote the dissent arguing that the US Supreme Court’s decision in favor of marriage equality had “no basis in the Constitution or (United States Supreme Court) precedent.”

Dickinson is now the newly confirmed CPS Commissioner in charge of the agency that denied the couple their child.