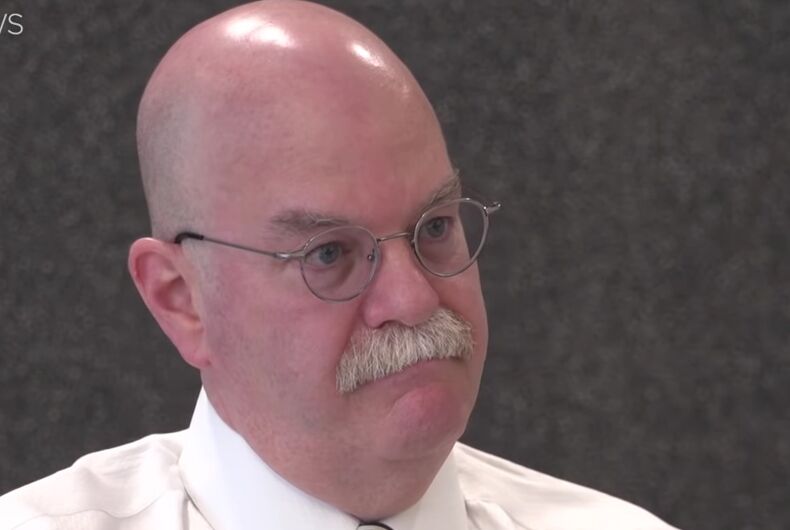 The Dallas News has withdrawn its endorsement of Vickers Cunningham for the Dallas County Commissioners Court after details of the living trust he created for his children have come forward.

Last week, the candidate’s gay brother Bill Cunningham went to the Dallas News with details of the living trust Vickers set up for his children. The trust pays out for certain milestones in the children’s lives, including “marriage to someone who is white, Christian and of the opposite sex.”

Cunningham denies being racist. He says that the living trust doesn’t “force” his kids to do anything, it just gives a distribution if they marry someone who’s white.

“I strongly support traditional family values,” Cunningham said in an interview last week. “If you marry a person of the opposite sex that’s Caucasian, that’s Christian, they will get a distribution. It doesn’t prohibit anything.”

When asked why that’s in there, he said, “It’s my religious belief that marriage is between one man and one woman. And I wanted to support my faith of being a Christian.”

He added that he believes it’s a “traditional family value” to marry within one’s race.

Cunningham said last week that he established the trust a long time ago… in 2010. He says that his views have since changed now that his son is dating a Vietnamese woman, but claims that he can’t change the terms of the living trust.

Cunningham’s brother – as well as a magazine writer who worked on the judge’s 2006 district attorney campaign – said that he frequently uses the n-word.

When asked if he had ever used the n-word, Cunningham tried to narrow the question down to whether he used it “in court.” But when the Dallas News pressed him on whether he used the word at all, he took a long pause, and said, “No.”

Bill Cunningham said that he went to the press with the information after the candidate went to his house and threatened him and his husband, who is black. Bill also said that Vickers referred to his husband repeatedly as “your boy.”

“His views and his actions are disqualifying for anyone to hold public office in 2018,” the brother said. “It frightens me to death to think of people in power who could hurt people.”

Vickers and his brothers Greg and Ross all said that their gay brother Bill made up the allegations because he’s estranged from the family.

“I’m embarrassed that my brother fabricated stories that drag my family’s name through the mud,” said Ross Cunningham.

But Bill’s allegations have been corroborated. Not only has Vickers confirmed that the living trust exists, but Amanda Tackett, who used to write for D Magazine and worked on the candidate’s 2006 campaign, said that Vickers used the n-word repeatedly, as well as the phrase “T.N.D.,” or “Typical N***** Deals.”

“I’ve never met another Caucasian person like this,” she said.

“If he treats me — someone that’s connected to his brother — that way, how is he going to treat the average citizen of Dallas that doesn’t look like him?” said Demonse Williams, Bill’s husband.

“We just want to live our lives and mind our business, and people are entitled to feel how they want — but he’s going to be in an elected position where he’d be making decisions that could impact people’s lives forever.”

Is Congress about to protect trans people in the military despite Trump’s objections?