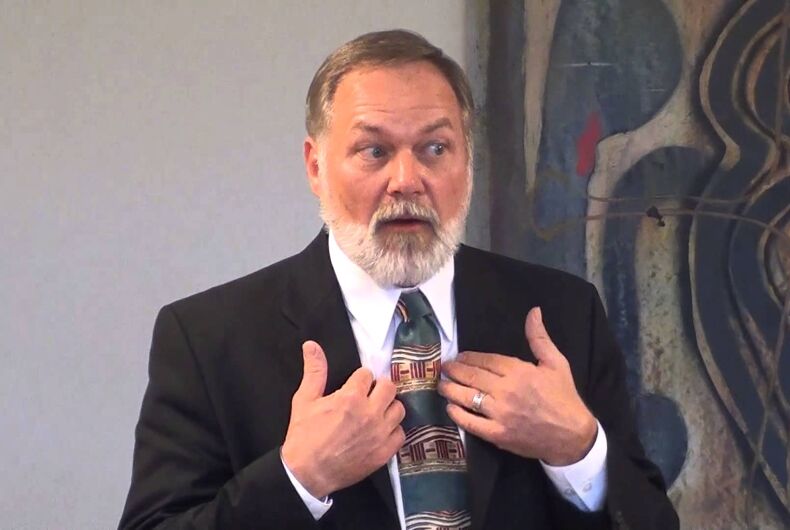 Scott Lively has a long, long history of anti-LGBTQ activism. He appeared on the scene in the early 1990s, as part of the movement to ban nondiscrimination laws in Oregon. He’s the co-author of The Pink Swastika: Homosexuality in the Nazi Party, which blames the Holocaust on the “central role” played by a gay cabal.

Lively is also one of the forces behind antigay legislation in Uganda, which culminated in a bill to make homosexuality a capital offense.

Given the direction of the Republican party, it’s no surprise that Lively is now a GOP candidate for governor in Massachusetts.

Despite–or more likely because of–his extreme views, Lively managed to win 27% of the vote at the party convention, easily exceeding the 15% threshold to get on the primary ballot. Lively will be facing incumbent Charlie Baker, a popular governor who is one of the few Republicans to succeed in a blue state.

Of course, Lively’s radical views don’t fit easily into Massachusetts politics. In an effort to prove that he’s deep, deep down a reasonable person, Lively wants you to know that he’s sorry.

“On LGBT issues, I want — I have some fence mending that I need to do with people in the LGBTQ community,” Lively said at the convention. “Mea culpa, I have overstated some things — not so much in my writings, I can defend just about anything I’ve written — but sometimes, giving a speech, especially when you’re under siege like I have been, and the media is only looking at you and not fact checking the other side too, sometimes you sort of fall into hyperbole, and I’m guilty of some hyperbole.”

Lively wasn’t specific as to what he “overstated.” Perhaps it includes some of the following:

You get the idea. And that’s just the tip of the Lively iceberg, which includes deciding Adolf Hitler was gay in order to explain Nazism.

Lively has gone the oh-so-sorry route before, in an open-letter to the community in 2011. It didn’t take. All of the examples above come from after that date.

Despite having built his career on attacking LGBTQ people, candidate Lively insists that’s not his focus. His main issue, he says, “is standing for the unborn.”

Gov. Baker was quick to condemn Lively, saying that “a lot of what he says…doesn’t belong in public discourse.”

Of course, that’s mild compared to the new one a federal judge ripped him in a suit brought against by activists in Uganda. The activists are trying to hold Lively accountable for the pain and suffering he caused LGBT people in that country.

Although U.S. District Court Judge Michael Ponsor dimissed the suit on jurisdictional grounds, he called out Lively’s writings–the ones he says he can defend–as “odious” and “crackpot bigotry.”

Even though Lively won the case, he’s still appealing, trying to get the judge’s opinion thrown out. The hearing will be in early June–perfect timing for Lively’s campaign.