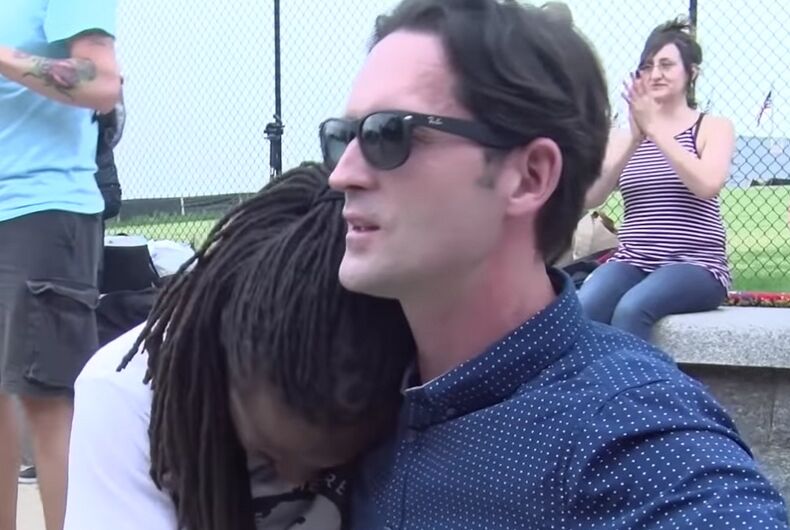 Ex-LGBTQ activists held a rally this weekend in Washington, D.C., which was attended by 36 people.

The Freedom March was “an opportunity for those of us who have a new life with Jesus to come together in fellowship and praise Him for the love and grace available to everyone who seeks it [and] to testify publicly of the life-changing grace available to leave the LGBT identity for something greater,” said Daren Mehl, president of Voice of the Voiceless.

McCall wore a red T-shirt that read #Jesus. He said, “Everyone has marches, all kinds of views and opinions. So I said, ‘I don’t really know about a march for people coming out of the LGBT [community] to follow Jesus so I want to do that.'”

Johnston, who does not identify as ex-LGBTQ, prefaced her comments by saying that she has “friends who are homosexuals” before identifying as an ex-LGBTQ “ally.”

The ex-LGBTQ movement has a deep sense of victimhood. No state bans adults from seeking conversion therapy, and even California, which is in the process of discussing the nation’s most aggressive anti-conversion therapy bill, isn’t trying to ban it but force conversion therapists to stop claiming in advertisements that they can change someone’s sexual orientation since there’s no evidence that they can.

Groups like Voice for the Voiceless portray conversion therapy as a science-based endeavor and not primarily religious. However, when the rally turned into a march from the National Mall to the White House, the rhetoric became exclusively Christian and the participants broke out in Christian song.

They held signs that read “Thank you Jesus” and chanted “Jesus loves” and “Freedom in Christ, it’s so nice.”

These cities are getting rainbow crosswalks to celebrate LGBTQ pride