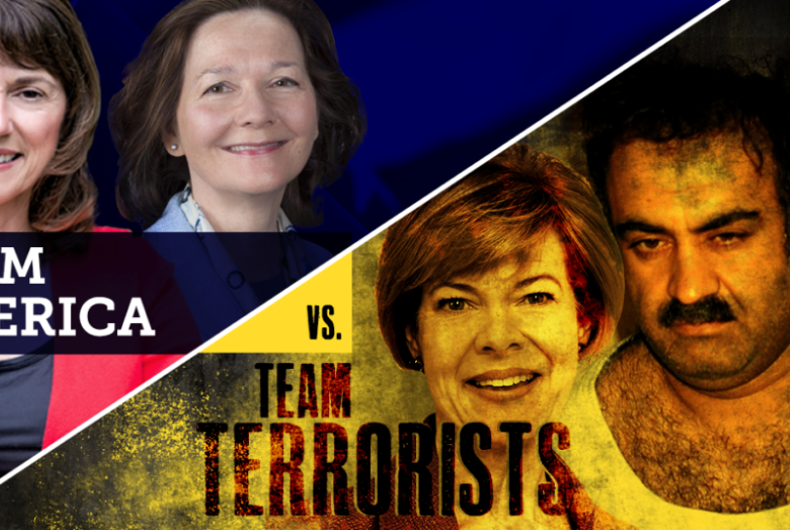 Sen. Tammy Baldwin is one of the GOP’s top targets in their efforts to minimize their losses in this year’s midterm elections. Republicans believe that Baldwin, a Democrat and out lesbian, is out of step in a state with a GOP governor and senator, and they are spending millions to topple her.

But Leah Vukmir, one of two Republicans running for the nomination, thinks she has the winning formula: smear Baldwin as no better than Al-Qaeda  for her lack of support for Gina Haspel, the nominee to be CIA director.

Baldwin’s campaign has labeled the ad as a “whole new low,” which is saying a lot in the current political environment. But Vukmir is unapologetic.

“If this is what it takes to get people talking about Tammy Baldwin’s liberal record and her tendency to disappear and not represent us then so be it,” she said.

Vukmir may be just the latest standard bearer for the party of crazy, but Baldwin has been dissed by her fellow Senators as well. Senate Republicans confirmed Michael Brennan to a federal judgeship, despite Baldwin’s objections.

Traditionally, Senators from the nominee’s home state sign off on the appointment by returning a “blue slip,” a procedural okay. Baldwin refused to do so for Brennan, an ultra-conservative who refused at his confirmation hearing to acknowledge that there is evidence of racial bias in the judicial system.

Brennan’s confirmation is part of a continuing effort by Senate Republicans to dispense with existing norms and pack the courts with as many right-wing judges as possible. These include such anti-LGBTQ luminaries as Kyle Duncan and John Bush.

Lambda Legal Defense estimates that nearly a third of Trump’s judicial nominees oppose LGBTQ civil rights, a legacy that will haunt us for decades to come.