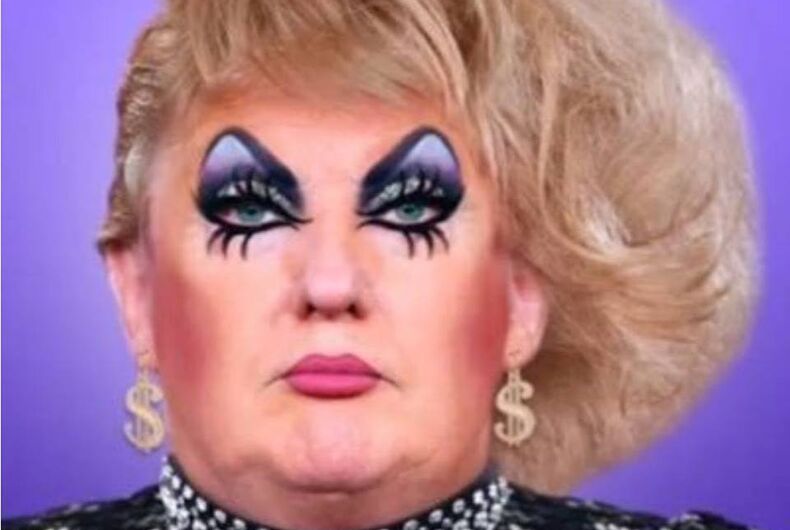 Queen Elizabeth won’t the only queen greeting Donald Trump when he visits the U.K. in July.

A thousand people have signed onto a Facebook invitation for a drag-queen protest to greet the president in London on July 13. Another nearly 7,000 people are interested in attending.

Manchester drag performer Cheddar Gorgeous and four other performers have issued the call to all drag kings, queens, queers and our allies.

“Due to the appalling way the Trump administration has regarded the rights and welfare of the LGBTQI communities in the U.S., the idea of a Trump visit to the U.K. is unacceptable,” the invitation says.

“Let’s get visible, stand with our sisters, brothers and others in America.”

Gorgeous also spread the word through an April 30 guest column in the Guardian newspaper. She and her group — Violet Blonde, Liquorice Black, Anna Phylactic and Jonny Banks — are making plans to meet in a central location and join the main protest against Trump.

In an interview with the British site Gay Star News, Cheddar cited Trump’s attacks against transgender people in the U.S. military and his removal of protections for transgender students.

“There’s also a broad issue around visibility,” Cheddar says. “There’s a wider point to be made about an attack on diversity. Diversity is becoming a scapegoat by the Trump administration and the people who support it.”

The July visit was confirmed April 25. Trump’s plans for an earlier visit to the new U.S. embassy in London fell apart in the face of protests. He blamed former President Barack Obama, of course, for the sale of the former embassy building.

This trip is described as a working visit. Likely translation? The Royals aren’t keen on it, though the BBC reports that he’ll likely meet Queen Elizabeth.

As for May 19’s royal wedding, neither Trump nor the Obamas have been invited to witness the nuptials of Prince Harry and American Meghan Markle, the BBC reported on April 10. Neither has British Prime Minister Theresa May, initially a Trump supporter.

Thus Trump’s July visit is an opportunity to use drag as an extravagant way to show our differences, Cheddar said.

“I think, historically, that’s what drag has done — from the Stonewall riots to the AIDS crisis — there’s something very special in standing out and drawing attention.”