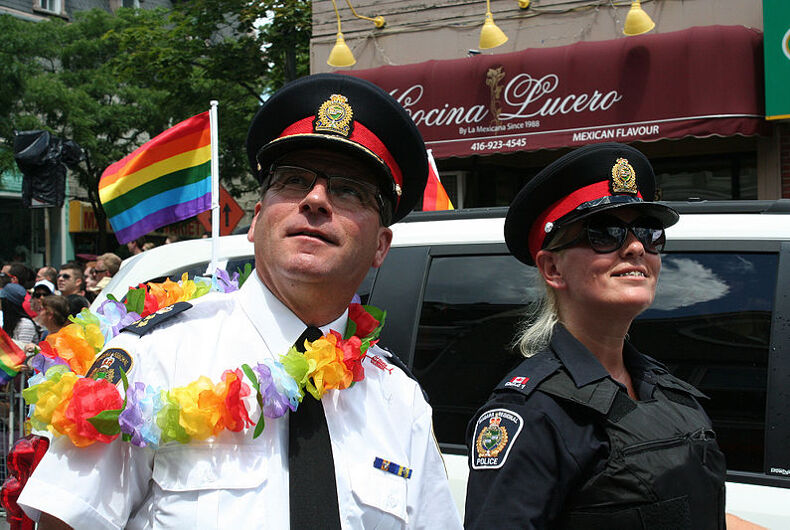 Toronto police, under fire for the slow response to investigate a series of gay murders, will not march in the city’s pride parade this year.

Pride Toronto had asked the city’s police not to march in the June 24 parade, one of the largest in the world. The department has agreed not to, and on April 3, it withdrew its application to march.

Event organizers said the presence of uniformed officers would have made the city’s LGBTQ community feel unsafe.

As late as December 2017, police had cited no evidence of a serial killer in Toronto’s Gay Village. But McArthur is now charged with first-degree murder in connection with the deaths of six gay men, plus a seventh unidentified male — Kinsman, Majeed Kayhan, Soroush Mahmudi, Dean Lisowick, Selim Esen and Skandaraj Navaratnam.

Related: The Gay Village serial killer is linked to a 6th savage murder

McArthur has not entered a plea in the case, and the investigation continues. Hundreds of missing-persons cases are now being re-examined, reports the Guardian, in London.

Olivia Nuamah, Pride Toronto’s executive director, said individual officers will be allowed to participate in the parade if they leave their uniforms, cruisers and guns at home.

“This has severely shaken our community’s already often tenuous trust in the city’s law enforcement,” the organization posted on social media. “Marching won’t contribute towards solving these issues. They are beyond the reach of symbolic gestures.”

The Toronto pride parade traces its history to another dark chapter in the city’s history — protests after the Operation Soap raids on four gay bathhouses in February 1981. Police arrested more than 300 people.

After criticism on how police handled the McArthur case, Police Chief Mark Saunders pushed back in late February. He told Toronto’s Globe and Mail newspaper that he blamed the people McArthur crossed paths with for not coming forward.

Now, however, Saunders says the move not to march is a concrete example that police are listening closely to the LGBTQ community.

“I am committed thoroughly to building a better, stronger relationship between us,” Saunders said in a statement. “Much more work is needed, of course. But hopefully this moment moves us forward in an important way.”

Toronto Pride’s statement acknowledged that this is a complex, difficult time.

“At the end of June, we will come together, as we have for decades, and we will be seen,” it said. “We will rally and rise, but it will be with heavy hearts, as we have not yet begun to grapple with our anger, shock and grief.”

The 5 most dangerous religious right leaders in Trump’s America