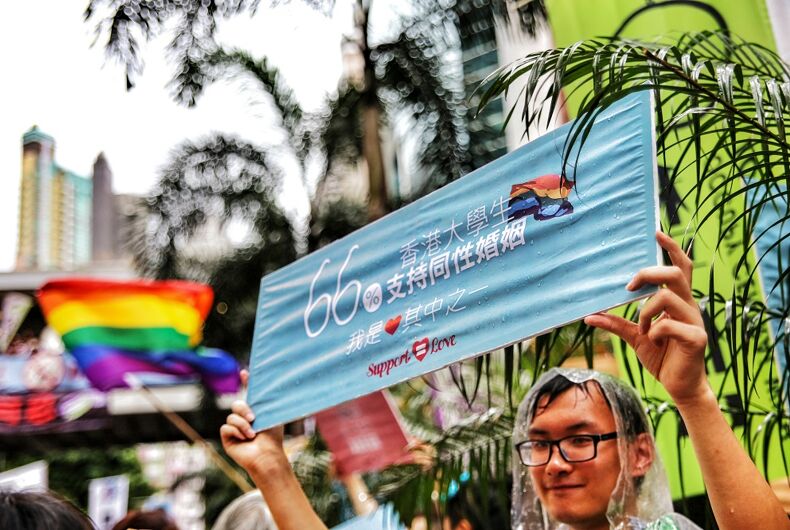 At a July 1, 2013, protest, marchers called on China to recognize LGBT rights.Photo: Shutterstock

Last Friday, the Twitter-like platform announced that it was taking measures to “create a sunny and harmonious community environment,” which it justified by saying that it was trying to comply with new cybersecurity laws put into place last year that hold online companies responsible for “unsafe or offensive content.”

In the Friday announcement, Sina Weibo said that it would be removing content that mentions homosexuality, pornography, and violence. The announcement was shared almost 200,000 times and got over 24,000 comments.

“They targeted the entire LGBT community in that notice,” said Xiaogang Wei, an LGBT activist in China. “We must pressure these companies and show them it’s not easy to discriminate against an entire community — no matter who orders them to do it.”

Over the weekend, users flooded the platform with messages that used a hashtag that translates to #Iamgaynotapervert and rainbow emoji.

“I am gay and I’m proud, even if I get taken down there are tens of millions like me!,” one user said.

The Beijing LGBT Center posted “We are all gay tonight” along with pictures of young people.

“I am the mother of a gay person,” a woman from Shanghai wrote in a message that was shared 11,000 times. “Sina Weibo has discriminated against a minority group by associating gay people with pornography and violence.”

The campaign got a lot of people’s attention, and the official newspaper People’s Daily even published an opinion piece entitled “It is common sense to respect people’s sexual orientation.”

In an announcement earlier today, Sina Weibo said that it would no longer target gay content and that it was looking for “discussions and suggestions” on the matter.

“As the gay community gets stronger, they have started to fight against discrimination,” Wei said.

Victims got a broken nose & a concussion in a shocking D.C. gaybashing