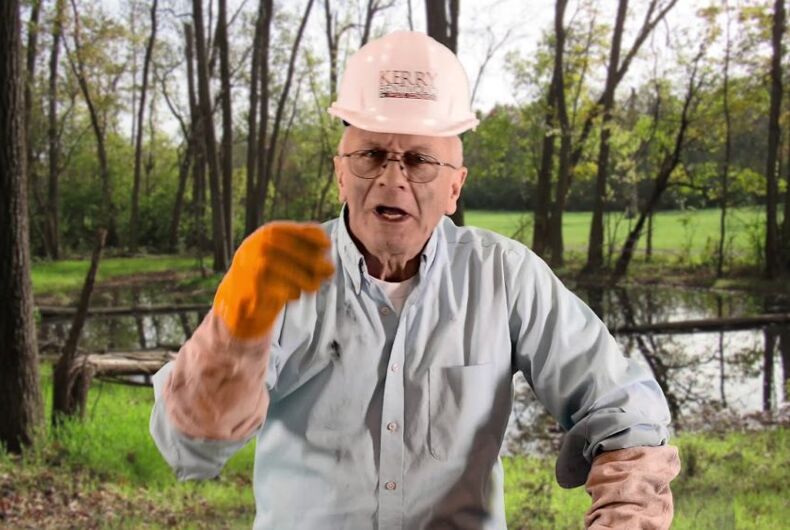 Even by the low standards of the modern GOP, Kerry Bentivolio stands out. Bentivolio was a one-term Congressman from Michigan who managed to slip into office on a fluke.

Bentivolio was a Santa Claus impersonator who raised reindeer. He’s also former high school English teacher who once told his students that they were “just a paycheck to me.”

Bentivolio won his race in 2012, only to have the party get its act together and make sure that he served only a single term. Now Bentivolio is running for his old seat, with a campaign ad that compares Rachel Maddow to a snake.

In the ad, Bentivolio, wearing a hard hat and rubber gloves, begins by addressing an actual snake. “Since Adam and Eve, you have deceived my people,” Bentivolio intones.  Then Bentivolio handles a pair of snakes, with the heads of Maddow and House Speaker Nancy Pelosi superimposed, while a narrator praises his time as “a snake hunter in Washington, D.C.”

“Let’s send Kerry Bentivolio back to Washington to hunt down the snakes,” the narrator urges viewers, while the ex-Congressman and ex-Santa Claus puts the snakes in a bucket and sits on the lid with a thud.

“You can help drain the swamp,” Bentivolio says. “I’ll get rid of the snakes.”

Exactly how Bentivolio is going to get rid of Rachel Maddow is a mystery. Even more of a mystery is why Bentivolio thinks average viewers are even going to recognize who she is and why she’s a central character in a Congressional campaign. Of course, it’s entirely possible that Bentivolio considers the fact that Maddow is a lesbian extra justification for her inclusion in the ad.

Even in his brief time in Congress, Bentivolio distinguished himself as part of the fringe. He declared that impeaching President Obama would be “a dream come true” and promised to hold a Congressional hearing on the chemtrail conspiracy.

Of course, Bentivolio is reliably anti-gay. He has railed against “socialist social engineering, the denouncing of our founding Christian values, our belief in family,” and received a perfect score from the Family Research Council for his voting record in Congress.

Bentivolio’s ad is a reminder of the fever swamps in which the Republican base dwell. Still, Bentivolio’s odds of success look slim. For his sake, he’d be better count on picking up some Santa gigs right after the election.

You drain the swamp, I'll get rid of the snakes.Help me out with a donation today.Find out more at my website: KerryBforCongress.com

A ‘men’s rights’ group is suing over the draft. It could make life easier for trans men.