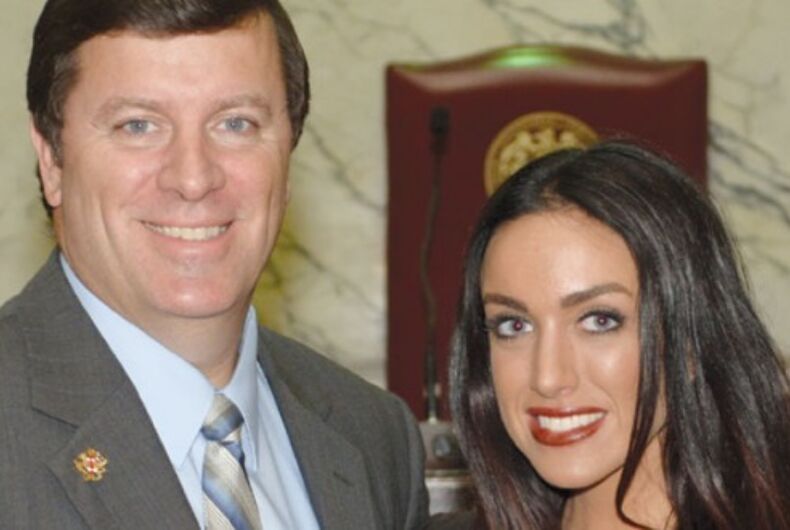 Maryland’s legislature passed a bill that bans licensed mental health professionals from trying to change the sexual orientation and gender identity of minors.

And the debate over the bill brought out a strange story from two politicians.

Delegate Meagan Simonaire (R) gave a speech against the bill, describing how her parents tried to “fix” her by getting her to go to conversion therapy when she came out as bisexual.

Telling the story in the third person, Simonaire said that her parents were “disgusted” and “heartbroken,” which led to “significant pain, self-loathing and deep depression” for her.

“They weren’t ever hateful,” she said, telling the story in the third-person, “but were fully convinced that she was living in sin and desperately wanted to get her the ‘help she needed.'”

Her father is Sen. Bryan Simonaire (R), and he voted against the bill, and was one of the most vocal defenders of the practice.

“I wonder if Jesus would have been banned if he had been licensed in Maryland,” Bryan said during the debate.

He also cited a woman who he said “had been a lesbian for 18 years and came out of it.”

“[We don’t want to] drive these children who need help, away from those who are trained, who are professional… and can help you work through these problems,” he said.

After the debate, Bryan denied ever trying to send Meagan to conversion therapy, although he said he wanted her to see “Christian counselors.”

“It was a dialogue between an adult child and their parent,” he said, stressing that he never said “to ‘do this or we won’t love you.’”

But his “loving” approach to conversion therapy didn’t impress Meagan. “If this bill keeps even one child from that, it will be worth sharing my story with you today,” she said in her speech.

If signed into law, conversion therapy will be classified as “unprofessional conduct” and mental health professionals will be subject to discipline from the state licensing board if caught practicing it.

“We should not as a body license people who are going to interfere in the lives of those young people and try to tell them who they are or how they should feel,” said Sen. Delores Kelley (D).

The bill was introduced by Sen. Richard Madaleno, the first gay member of the Maryland Senate. He said that the bill could save the lives of LGBT youth.

“This is a discredited practice, and we’re just trying to align our law to that degree,” he said.

Republicans who opposed the bill generally shied away from directly defending conversion therapy.

“We should not be setting the state of the art on this or any other medical procedure. It’s the wrong way to go,” said Sen. Robert Cassilly (R).

“This bill does not allow any professionals to discuss alternatives to anyone who is questioning their sexuality,” said Sen. Johnny Ray Salling (R). “We should all be worried about that.”

“The Maryland General Assembly has chosen to protect our youth by joining the growing list of states banning conversion therapy,” said FreeState Justice Executive Director Mark Procopio. “These widely discredited and harmful practices have no place here. Governor Hogan’s signature on this legislation will send a message to LGBTQ youth across our state that they are perfect just the way they are.”

Her father, Sen. Bryan Simonaire, opposed the Senate Bill. At the end of the delegate's comments, she said thanks for allowing me to share "my story." After the bill passed, delegates rose, faced Simonaire and applauded.