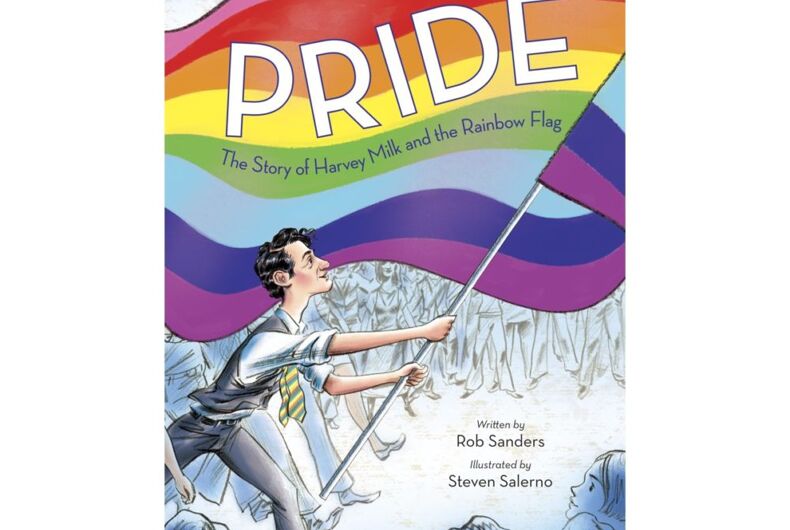 Pride: The Story of Harvey Milk and the Rainbow Flag By ROB SANDERSPhoto: Random House Books for Young Readers

There’s a new picture book available and even if you’re not between the ages of 5-8, you’re likely going to want one. Pride: The Story of Harvey Milk and the Rainbow Flag is the children’s book you needed as a kid.

The story is written by Rob Sanders, who told NBC News that he was inspired by the reaction to the Supreme Court ruling that legalized same-sex marriage.

“It seemed like the entire world was suddenly a rainbow,” he said. “Niagara Falls had rainbow lights shining on it, the White House had rainbow lights shining on it, and it dawned on me that this was a story that kids needed to know. They didn’t know the origin of the pride flag or its importance to our community, and I wanted to tell that story.”

So that’s exactly what he did.

Together with illustrator Steven Salerno, they tell the story of the gay civil rights hero’s collaboration with Gilbert Baker, the creator of the now-iconic rainbow flag.

“Harvey Milk was an ordinary man, but he had an extraordinary dream,” the book starts. “That dream would change history.”

Thankfully, Sanders and Salerno don’t resort to making the story all about Milk as has often happened with LGBT history lately. Baker’s integral role in shaping the visuals of our movement also happen along side the sense of community and hope that both men embodied.

“Volunteers came, dyed the fabric by hand, cut and stitched it together,” Sanders explained to NBC, adding that the flag didn’t just magically appear.

“A group of people had their hand on it, [and it] symbolizes the way the community is today. That it really does take different parts to form the whole.”

What better lesson could we teach our kids than that?