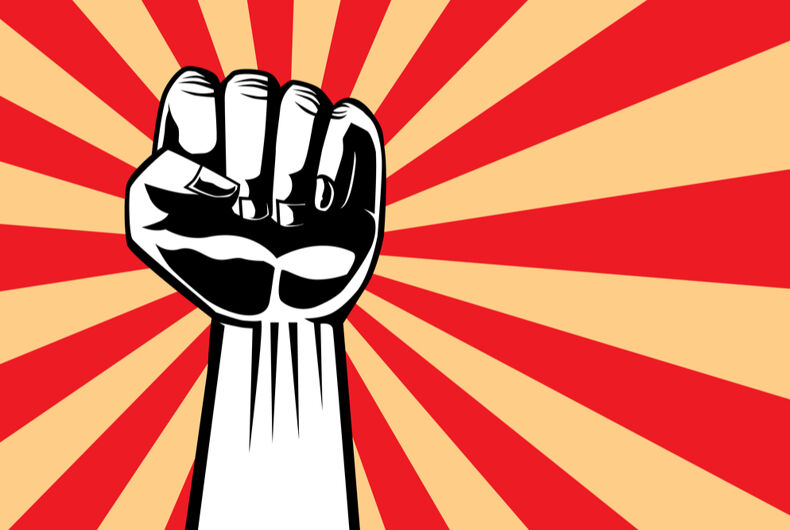 Students throughout the country walked out of classes yesterday to protest the national plague of gun violence. Most demonstrations included a 19-minute period of silence to commemorate the 19th anniversary of the Columbine High School shooting murders, a tragic incident occurring on the same date, April 20 – before most of the young demonstrations were born.

Students risked punishment for their actions, including potential school suspensions and grounding by parents and guardians. Several school officials received threatening phone calls and messages on email and social media such as Facebook and Twitter from community members demanding action against students who took part in the walkouts.

“We had over 300 Facebook comments with adults just throwing a huge fit about it,” she said to the Argus Leader. “They were just being really, really rude. They were insulting our intelligence…making us feel like we did not have a voice.”

According to the great abolitionist who escaped the chains of bondage, Frederick Douglass, “Power concedes nothing without a demand. It never did and it never will.”

Throughout recorded history, governments, institutions, and powerful individuals have devised ways of silencing opposition to maintain and extend its control and domination. They commit physical or psychic murder upon those who speak and live their truth when this contradicts “official” policies and teachings.

For example, the Catholic Church convicted physicist and astronomer Galileo Galilei on the charge of heresy by insisting that the Earth revolves around the Sun, rather than, as per church teaching, the Earth was the immovable center of the universe with the Sun revolving around the Earth.

The church forced Galileo to spend the remainder of his life into the 16th century under house arrest. It took the church under Pope Paul II approximately 350 years to finally admit that they got it wrong.

Joan of Arc, the teenager who helped defeat the English in her native France, became one of the greatest war heroes in French history. Despite this, she was tried by the Catholic Church on the charge of heresy by donning men’s clothing.

Joan asserted that her style of dress was her religious duty and higher than church authority. She argued: “For nothing in the world will I swear not to arm myself and put on a man’s dress.”

Catholic inquisitors accused her of practicing paganism and condemned her to death for wearing men’s clothing and armor, and burned her at the stake as a heretic.

In the U.S. in 1860, poet Walt Whitman published his book, Leaves of Grass. The section titled “Calamus” was clearly homoerotic.

Kalamos in Greek mythology turned into a reed in grief for his young male lover, Karpos, who drowned. The Acorus calamus is the name given to a marsh plant. For Whitman, his “Calamus” poems represent the kind of love between Kalamos and Karpos.

Soon following the book’s publication, authorities removed it from library shelves at Harvard University and placed it in a locked cabinet with other books thought to undermine students’ morals. Whitman was fired from his job at the U.S. Department of the Interior.

Throughout the recent centuries courageous abolitionists have been arrested and killed; suffragettes risked scorn, imprisonment, and job losses; union organizers were bashed, brutalized, arrested, and killed standing for workers’ rights.

Officials arrested and banished Richard Loving and Mildred Jeter Loving for marrying, which was contrary to laws outlawing interracial sexual relations. A man shot and killed Rev. Dr. Martin Luther King Jr., Medgar Evers, and thousands of others for standing up to white supremacy and racism.

Police arrested Rosa Parks for sitting down in the “white” section of a public bus and thereby stood up to segregation. A man shot and killed Harvey Milk for working for progressive and inclusive political goals.

Nearly every three days, a person is killed somewhere in the world for expressing gender diversity with the vast majority of murders being trans women of color.

Several of our great world leaders who reached out to the other side (their “enemies”) not only experienced criticism by members of their own ranks, but were tragically assassinated by their own people for their courage to reach out in the name of peace.

While support and unqualified praise for the youthful leaders of the recent school walkouts, the March For Our Lives, and the ongoing #NeverAgain movement have streamed in, the naysayers and power brokers lambasted them by attacking their efforts.

As expected, the National Rifle Association mocked and demeaned March organizers and other survivors of gun violence.

An NRA membership-drive video ran the caption, “Today’s protests aren’t spontaneous. Gun-hating billionaires and Hollywood elites are manipulating and exploiting children as part of their plan to DESTROY the Second Amendment and strip us of our right to defend ourselves and our loved ones.”

A video titled “A March For Their Lies” featured NRA TV host Colion Noir who asserted, “From where I’m standing, it looks like a march to burn the Constitution and rewrite the parts that they don’t like in crayon,” referring to the youthful participants.

In another NRA TV clip, Noir scolded the Parkland survivors, saying “no one would know your names” if someone with a gun had stopped the shooting at their school….These kids ought to be marching against their own hypocritical belief structures,” Noir continued. “The only reason we’ve ever heard of them is because the guns didn’t come soon enough.”

Representative Steve King (R-Iowa) shared a meme on Facebook attacking student leader Emma Gonzalez’ Cuban heritage that said, “This is how you look when you claim Cuban heritage yet don’t speak Spanish and ignore the fact that your ancestors fled the island when the dictatorship turned Cuba into a prison camp, after removing all weapons from its citizens; hence their right to self defense.”

History shows us that the change process, rather than moving forever forward in a linear fashion, deploys more like a continuing spiral stretched out. We commence our travels forward, and then we begin to circle up, back, then down, then we continue the process over and over again through time.

But as we begin moving forward on each consecutive revolution of the spiral, we stand a bit further ahead, further onward than we did at the previous cycle.

Possibly this is what Rev. Dr. Martin Luther King Jr. was imagining when he told us that “[t]he arc of the moral universe is long, but it bends toward justice.”

Like the truth tellers of the past, history will ultimately vindicate and celebrate their efforts.