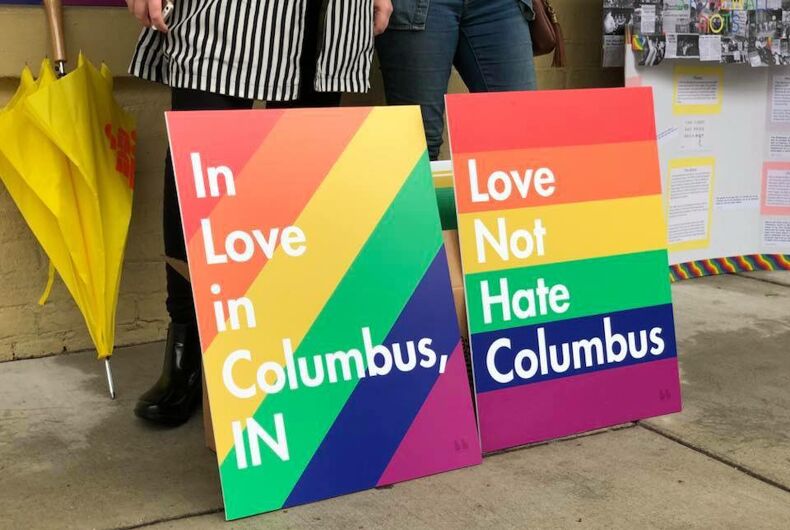 High school student Erin Bailey is going to get an A on her senior project. She just pulled off something no one else has. She hosted a pride festival in notoriously anti-LGBT Vice President Mike Pence’s hometown.

Over 1,000 people braved chill winds and rain to show support for the LGBT community in Columbus, Indiana. Shortly after the event started, the rain died off and the sun came out to shine on the parade of people streaming through the downtown streets.

The city of 47,000 people welcomed the visitors warmly. The Old National Bank downtown had rainbow colored banners in the windows touting diversity and inclusion.

Cummins Engine Company, the Fortune 500 company that inadvertently kicked off the town’s first LGBT protest in 2000 when it began offering domestic partner benefits, flew the rainbow flag over their corporate headquarters.

About the same amount of people rallied in the town after the company announced their decision, praying that the corporation would repeal their decision.  Letters to the editor flooded the local newspaper, religious right leaders all over the state goaded their flock with prophecies of damnation and drag queens, and many in Columbus would have gladly pulled in the welcome mat.

“This is Indiana, not San Francisco,” a Cummins engineer named Ben Manring said in a press release for the prayer rally. “Attracting homosexuals to Columbus will bring grave changes to our community.”

A counter-rally to support the company, co-organized by my husband and I with a handful of locals, drew 150 people. It was the largest LGBT protest in the state at the time.

The problem with Manring’s logic, and the reason why one of my family members attended the prayer rally in 2000 but stood with the LGBT community at today’s pride festival, is that we were already here.

No religious zealots protested at the festival today.

Over 1,000 people turned out for the first pride festival in Mike Pence's hometown. 20 years ago, a thousand people…

Christian privilege: What is it? Why doesn’t Fox News want to talk about it?

Conservatives are shocked — shocked! — that a college has sex education