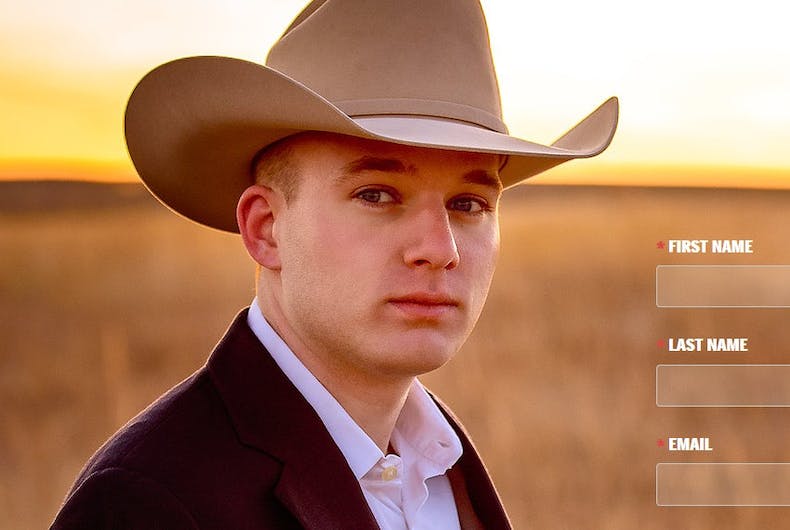 A gay Trump supporter who opposes marriage equality is running for the Oklahoma House of Representatives.

Colton Buckley announced that he’s running for state representative in a seat vacated by a Republican who got elected to the state senate.

In 2016, Buckley was a delegate to the Republican National Convention. He explained why he, as a gay man, supported Trump.

“There’s a slim quarter-page of the [GOP] platform that says, ‘We don’t support same-sex marriage, we don’t support these types of things, etc,” he said.

“But I would rather deal with a Republican who’ll say, ‘I don’t necessarily agree with you,’ than deal with someone who aligns themselves with Hillary Clinton and the Democrats, where the Clinton Foundation has taken tens of millions of dollars from Saudi Arabian nations, where if I live there as a gay man, I would be publicly executed.”

He was referring to a donation made by Saudi Arabia (the only known Saudi Arabian nation) in 2008 to the Clinton Foundation in order to promote global health and disaster relief.

Clinton never said she would try to pass Saudi Arabia’s anti-homosexuality laws in the U.S., so it’s unclear why he brought that up.

Buckley continued: “There are gay Republicans here that are much more moderate than me. I may be one of the most conservative gay Republicans here, because of the fact that I don’t believe in same-sex marriage. Marriage is a religious term between one man and one woman. And, as a gay man, I don’t think the government should be involved in handing out marriage licenses. I think the government should give everyone, straight or gay, a civil union, not a marriage.”

His campaign website, with a few exceptions, only gives vague platitudes about his position on most issues. But it is clear that he is anti-choice, promising a “halt the merciless slaughter of our state’s unborn.”

He also says the Second Amendment has “no fine print,” and on Twitter he clarified that that includes weapons designed for mass shootings.

Ain’t that the truth! 😂
If only Liberals understood this… #BuckleyForOklahoma pic.twitter.com/CG8xXS4pxs

The website, though, doesn’t say that he’s gay or talk about his personal life at all, an unusual choice for someone running for elected office, since they usually discuss their spouses and their families on their websites.

As a Delegate for @realDonaldTrump in 2016, I am proud that he is shaking up DC & putting America first with the recent news of disarmament talks with North Korea. It’s time we finally have a president that voices the power & might of our great nation! #MAGA #BuckleyForOklahoma pic.twitter.com/c78Ycg12dr

Easter is the holiday for people on the margins of society