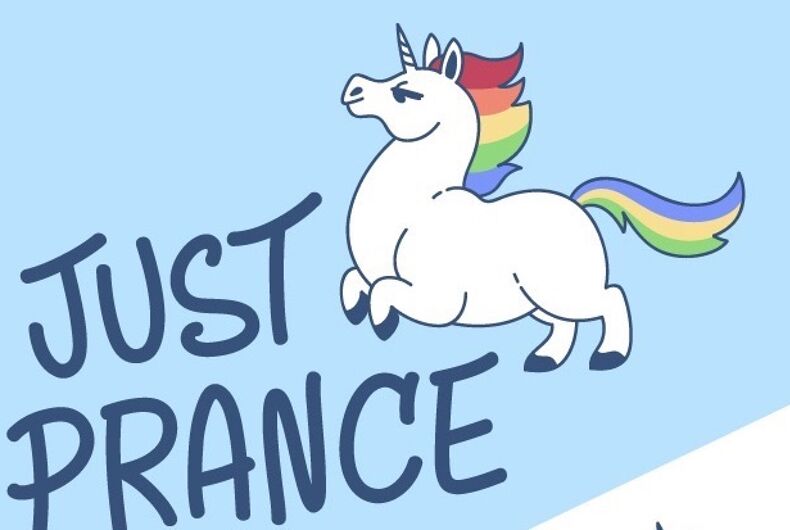 Is it homophobic when one man accuses another of “prancing around”?

The Democratic race for Maryland governor heated up recently when tech entrepreneur Alec Ross said he would get things done as governor, unlike a state senator who “prances around Annapolis talking.” The state senator in question is Ross’s openly gay opponent, Richard Madaleno.

Accused of using dog whistle politics in his remark, Ross said that he would never attack someone because of who they are and that his phrasing was “poorly chosen.” Julie Verratti, Ross’s lesbian running mate, came to his defense on Twitter as “a good + decent person who made a poor language choice.”

Madaleno’s response was one for the ages. “As an elected official I have pranced my way to victory with: the assault rifle ban; marriage equality; the fracking ban; free community college tuition… And I will keep delivering results by fighting in the Senate for all Marylanders,” Madaleno said. “Trust me to prance my way to the Governor’s mansion this November.”

But the question remains when the air from this dustup finally clears: was the remark itself homophobic? What makes it homophobic? Is it the intent, or merely the content? Or does it depend upon the record and background of the speaker?

Would Ross’s remark have been more obviously offensive coming from a candidate with a proven record of anti-gay comments and actions? Probably. There would be little debate about the intent behind his words.

Ross’s record might make it harder to judge the intent of his words. However, taken in context, the content is still problematic.

Let’s face it. “Prances” is at the very least a loaded word, when used as a remark against an opponent who happens to be a gay man. Regardless of intent, it’s too easy to interpret as an indirect slur against his opponent’s orientation.

It’s just a word. But LGBTQ Americans who’ve been called just about everything in the book know that words have an impact. It would have been just as bad if Ross had said that Madaleno “minces” or “flits” around Annapolis talking.

Regardless of his intent, as an ally of LGBTQ Americans, Ross should know better.

When we had few friends in high places and even fewer seats at the table, we might have been willing to give our allies the benefit of the doubt. But, now, given the high stakes in the Trump era, we expect more even from our friends. Perhaps especially from our friends.

In the past, we needed our allies to prevent bad things from happening. Now, we’re fighting to hold on the gains we’ve made. Perhaps we’re even less inclined to give our supposed allies a pass, in the same way, we’re less willing to give our homophobic cousin or racist uncle the benefit of the doubt.

When they slip up, as Ross did, our allies can expect to be called out on it just like he was – if only so that they remember to do better next time.

50 years later: What have we learned from the death of Dr. Martin Luther King Jr?