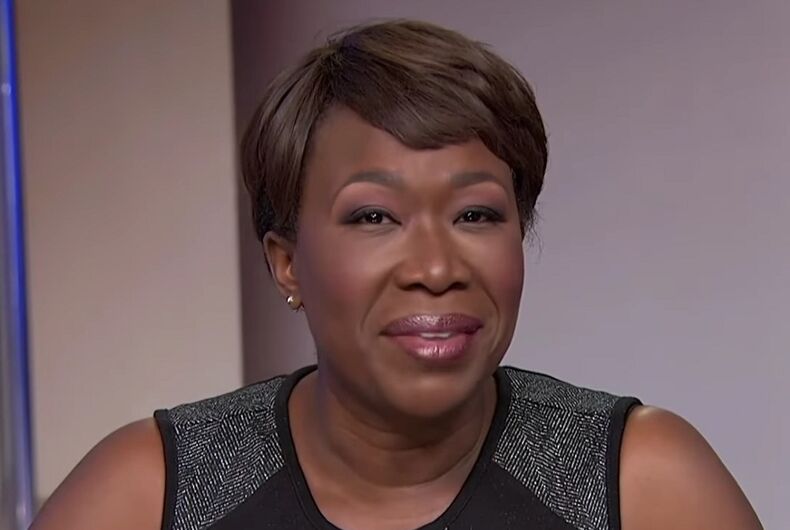 MSNBC host Joy Reid has been caught up in the outrage machine for days now because of a series of posts she is supposed to have made more than a dozen years ago on her now-defunct blog. The posts, publicized as homophobic by Mediaite, follow a previous round of old posts for which Reid apologized.

The debate has grown, with PFLAG withdrawing an award it was going to give Reid and the Daily Beast “going to hit pause” on Reid’s column for the site. Reid is now under full-fledged siege from a variety of sources, with speculation growing that her days at MSNBC are numbered. The perfect media storm is the confluence of a number of events, to which Reid herself has contributed.

The original story on Mediaite was designed to catch attention. The watchdog site, which has been criticized from both the left and the right, was quick to label the posts in question as homophobic, saying that Reid engaged in “the outright mocking of gay people.”

That’s great as clickbait, but it’s not good journalism. A closer look at the posts calls that judgment into question. Mediaite’s definition of homophobic is often pretty flimsy.

For example, Reid supposedly wrote that “I think a lot of heterosexuals, especially men, find the idea of homosexual sex to be … well … gross, and they lump it in with immorality. And then there are the concerns that adult gay men tend to be attracted to very young, post-pubescent types, bringing them ‘into the lifestyle’ in a way that many people consider to be immoral.”

Let’s be clear: the posts in question come across as dumb and sloppy. Calling them homophobic is a judgment call (or the nuclear option), which Mediaite was all too happy to make.

Of course, Reid had already apologized for some previous posts, including one jokingly speculating about the interests of former Florida Gov. Charlie Crist, whose sexual orientation was widely discussed even in the mainstream media. Mediaite called that post homophobic too, which really stretches the definition of the word.

The rest of the mainstream media has simply parroted Mediaite’s allegation without a second thought. As a result, all of the headlines related to the story brand the posts as homophobic, when in most cases that’s open to debate.

Some of the posts really are offensive. For example, Reid reportedly wrote that she didn’t want to see Brokeback Mountain “because I didn’t want to see the two male characters having sex.” The author goes on to say that “part of the intrinsic nature of ‘straightness’ is that homosexual sex is…well…gross, even if you think gay people are perfectly lovely individuals.” Only “political correctness” prevents straight people from saying as much aloud, even though it’s okay for gay people to say straight sex disgusts them.

Among Reid’s loudest defenders are the LGBTQ activists who have known her for years. Eric Jotkoff, a former spokesperson for the Democratic Party in Florida, where Reid lived, recalls in a Twitter thread that Reid pushed him hard in 2008 on why the party wasn’t taking a more active stand for marriage equality.

Similarly, Michael Rajner, now vice chair of the Broward County Human Rights Board, has known Reid for a dozen years and says that the language in the posts simply don’t match the Reid that he knows.

“I’m troubled that there’s this smear campaign against her, when she has done nothing but use her platform and her voice to lift up our community and ensure it is represented in her news stories and on the panels she has on news segments,” Rajner says. “I know she believes in our struggle.” Rajner notes that Reid’s support for marriage equality dates to 2008, well before most politicians and the majority of the public was comfortable with the idea.

Of course, the problem with blogging, particularly a decade ago was that it was a volume business, which meant there was a greater possibility of saying something offensive or ill-conceived. Bloggers didn’t have editors to save them from their worst impulses.

But instead of using that argument, Reid says she was hacked. “[W]e have significant evidence indicating that not only was Ms. Reid’s old blog compromised, some of the recently circulated posts were not even on the site at any time, suggesting that these instances may be the result of screenshot manipulation with the intent to tarnish Ms. Reid’s character,” according to a statement by Jonathan Nichols, an internet security expert that Reid hired.

While Nichols makes the case for hacking (and the FBI is apparently investigating the allegation), other tech experts say that the claim is far-fetched. The Internet Archive, the repository upon which the supposedly hacked posts resides, says that it sees no evidence of intrusion.

Moreover, someone would have to go to extraordinary lengths to take on the challenging task of retroactively introducing posts to a defunct site. If a hacker were to do so, why not post material that is decidedly more inflammatory?

Needless to say, the right wing would rejoice in claiming Reid’s scalp. But the bigger issue is whether the outrage directed at Reid matches the supposed crime. Fair or not, by digging in her heels this time after being called out once before, Reid looks like she’s trying to cover up her past. And as anyone in Washington will tell you, it’s not the crime that topples public figures.

Where are the gay ‘incels’?