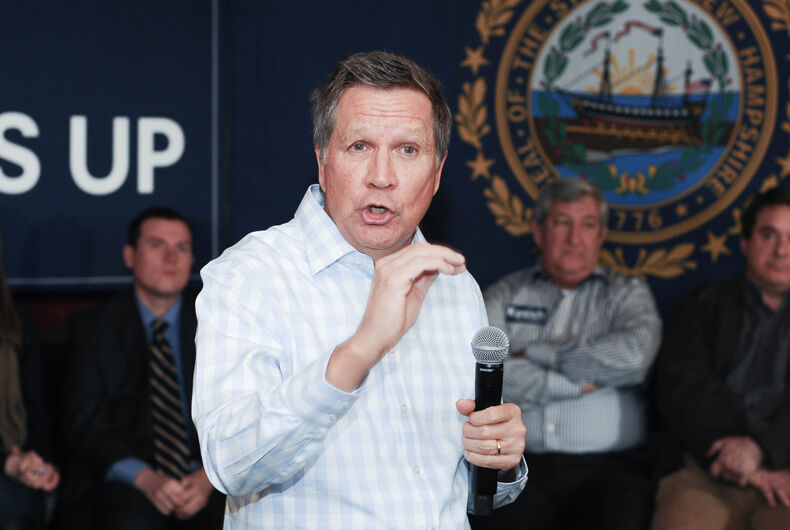 Ohio Republican governor John Kasich is back in New Hampshire, strongly hinting that he may challenge Trump in 2020. Here are some things to remember about him.

If he makes good on his threat to run again in 2020, Kasich will present himself as a moderate alternative to Trump. After all, he’s one of the few Republican now willing to openly criticize Trump on issues ranging from healthcare to Russia.

“I think I’m increasingly viewed now as not just a Republican but as something different, kind of a hybrid,” Kasich said in a recent interview.

That’s how Kasich would like to be seen, but his record tells another story.

He may not be a climate change “denialist,” but Kasich is the same “do nothing” he’s always been on the issue. He admits that climate change exists, but he doesn’t want to do anything about it.

Kasich may have waved the white flag on marriage equality, declaring “It’s time to move on,” after the Supreme Court made marriage equality the law. But he’s still the same guy who backed his attorney general’s plan to fight a state court ruling that required Ohio to recognize same-sex marriages.

He’s also the same John Kasich who said that victims homophobia should just “get over it,” and whose “spiritual adviser” characterized LGBT activists as fascist “thought Nazis.”

Kasich is the same governor who waged war on women at every opportunity. He signed in to law 11 bills that restricted access to abortion in Ohio, causing nearly half of the state’s clinics to close. Kasich signed into law a bill banning abortions after 20 weeks, with no exceptions for rape or incest, unless a doctor determines the fetus cannot live outside the womb.

Kasich has also worked to undermine public education in Ohio, pushing for corporate school “reform” and expanding charter schools, even though Ohio’s charter schools are among the most troubled in the country.

Is the trans movement too dependent on the courts for success?