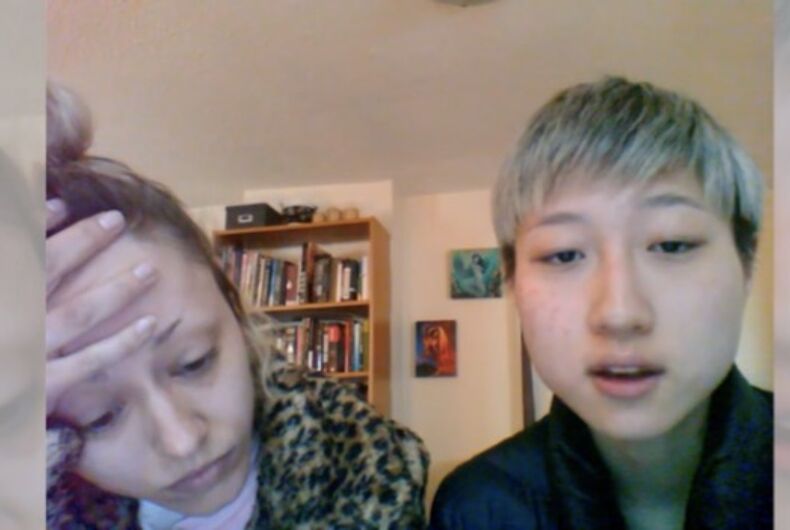 Jackie Chan’s estranged daughter, Etta Ng, has been missing for months according to her mother, but she and her girlfriend, Andi Autumn, have finally shown up – on social media. The two lovers have posted a video saying they are homeless and it’s “due to homophobic parents.”

The two say they found temporary shelter with a friend, but they can’t continue to stay there. Saying they are suffering from post-traumatic stress disorder, they are “extremely flustered about the whole situation” and no “families, friends, or government services” will help them.

“We’ve pretty much slept under a bridge and other things,” Ng says in the video.

Ng’s relationship with her mother has reportedly been strained for years. Shortly after she came out, Ng dropped out of high school, quit her job, and moved to be with Autumn. The two were last spotted in Canada where Ng told a convenience store clerk she was searching for her father.

Her mother doesn’t seem to be supportive of Ng’s relationship with the much older Autumn, but stops just short of being homophobic.

“She’s already 30-something and is a teacher with working experience. How can she tell an 18-year-old girl to film such a video? It’s wrong,” her mother told Coconuts. “I feel that if they have no money, they should go find work. They shouldn’t film a clip telling others they are broke and who Etta’s father is. People all over the world work hard and don’t rely on someone else’s fame to get money.”

“Many people in Hong Kong get paid low wages, but they still go to work. If they don’t have work, then they’ll film these videos to complain about their parents? How many of these videos would we see in a day then?”

When asked if she’d spoken to her daughter recently, however, she would only respond, “I don’t want to talk about it.”

In 2015, Ng was arrested over allegations of child cruelty. She was released without charges.

When Ng came out, her father simply said, “If she likes it, that’s fine.”

Can you guess what type of person most Republicans don’t want to see as president?