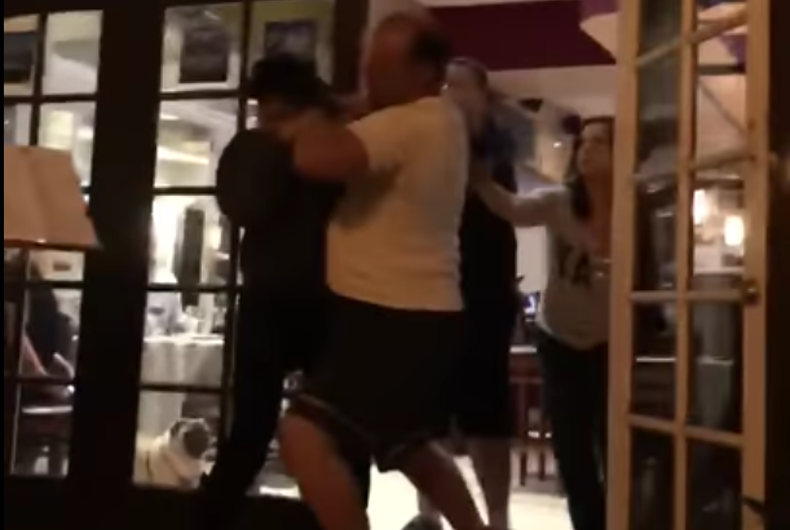 Three people who were violently thrown out of a restaurant in southern California are now suing.

Angel Bonilla, Colton Moyer, and Clement Serafin filed a lawsuit Monday against Balboa Inn in Newport Beach, California. They say that they were denied service because of they’re gay and were then violently thrown out of the hotel’s Siena Cucina Italiana restaurant on April 13.

The filing says that the incident began at around 8 p.m. when the bartender “forcefully and inappropriately demanded that plaintiffs show their respective identification cards because she wanted to create a ruse for refusing to serve them when her real motive was to not serve gay men.”

The lawsuit says that she looked at each of their ID’s and said that Serafin’s was “fake.” They contend that all three of them are over 21 and that their ID’s were real.

When they asked to speak to a manager, the bartender yelled “get out.” She used an anti-gay slur and told a security guard to kick them out.

A security guard then yanked Moyer’s stool out from under him, causing him to fall, and then he grabbed Bonilla and threw him to the curb, which was caught on two cell phone videos.

Another customer called the police and an ambulance came.

The lawsuit alleges assault, civil rights violations, and emotional distress and is asking for unspecified damages.

The restaurant/hotel has not commented on the attack or the lawsuit.

Police are investigating the attack and say that they are currently unable to find the security guard. He is wanted for questioning.

Newport Police are asking that anyone with information about the security guard in the video to call (949) 644-3790.

No, Chick-fil-A isn’t ‘infiltrating’ New York City, it’s opening stores there. Get over it.