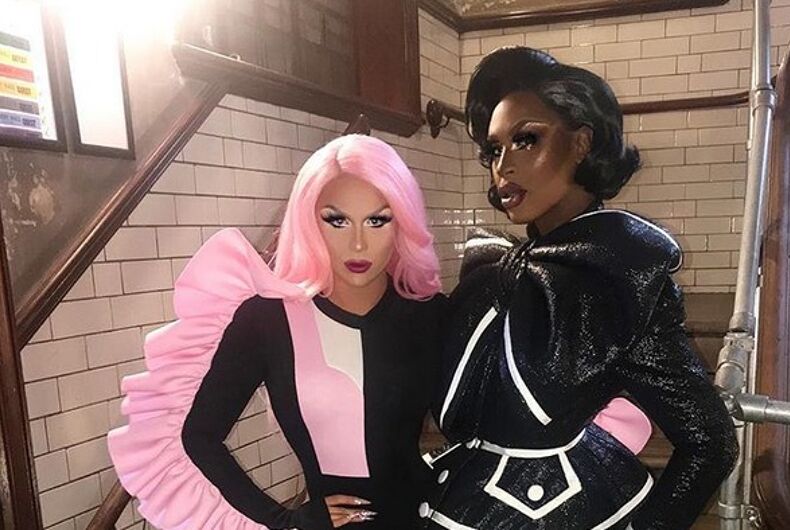 They apparently didn’t know that drag queens are trained in the fine art of reading.

Farrah Moan and Shea Couleé were in Newcastle in the north of England on tour when they went to a kebab shop… in pink hair.

Some drunk women shouted slurs like “slut” and “faggot” at them, and someone started recording the altercation on their phone.

In the video Farrah can be heard saying, “We’re touring the world being gay while you’re living in Newcastle with your crusty ass eyelashes.”

Shea laughed at the read, and one of the girls responded with hate: “You’re a walking STD.”

After the video was posted, Farrah explained what happened on Twitter.

Hahaha I didn’t maintain my classiness to well in the video… I was drunk as hell and some lil girl came up to Shea and I with her phone calling us faggots, walking stds cuz my hair was pink and I guess she was white girl wasted 😬

Then something strange happened: people from Newcastles apologized for their city.

so I didnt wanna bring attention to the negativity that happened to me and shea last night in Newcastle at a kebab shop but the vid is spreading. No need to apologize on behalf of the city- our show was amazing and theres homophobic twats all over the world. Love you guys!

A class act to her fans, but not to the haters.

Still, it’s 2018 and gay people can get slurs shouted at them in public. No matter how great anyone’s response is, it’s scary that it happened at all.

This trans woman was shot & killed in her car. People drove around her for hours without stopping.