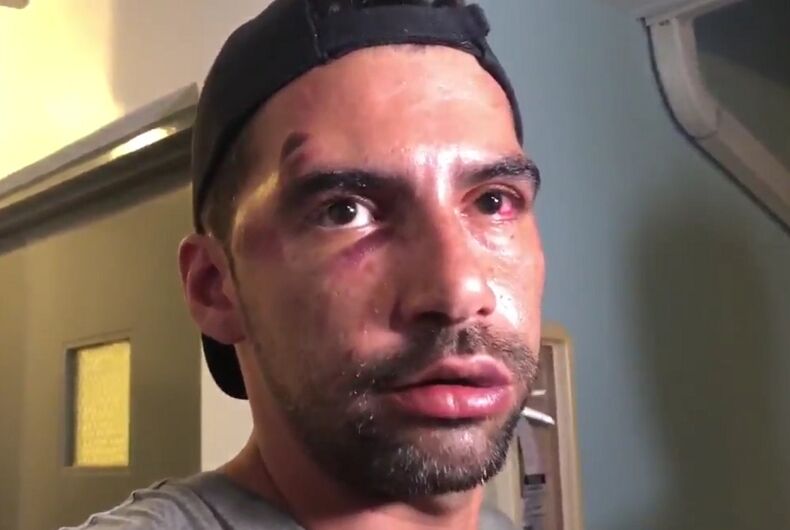 Rene Chalarca and Dimitri Lugonov were just exiting a restroom in Lumus Park at around 7:40 p.m. on Sunday. They say that they were holding hands and hugged, and then three or four men attacked them.

“They start to hit us, like beating us, hard,” said Charlarca.

“It was, like, instant. I got hit, and they knocked me out,” said Logunov.

But they didn’t stop hitting Logunov. “I was on the ground, they started beating me up.”

That’s when Chalarca said he tried to defend Logunov. “Then they start kicking me and punching me, without a reason.”

That’s when a bystander, Helmut Muller, tried to help them.

He was standing near the bathroom and, when he tried to intervene, he was pushed back to the ground and the back of his head was cut, leaving a pool of blood on the sidewalk. He required four stitches.

“All I remember is waking up, I’m on the ground and I saw the blood,” Muller said.

The victims say that police didn’t take the crime seriously at first.

Chalarca and Lugonov say that they told police to go after the attackers, who they could still see, but that police said, “We won’t chase them, they are far.”

They said that a female officer told Lugonov to “stop the drama, shut the fuck up” and another said to “put ice on your face at home and you’ll be alright.”

Chalarca and Lugonov suffered bruises and cuts on their faces and were treated by paramedics on the scene. They were told to go home and put ice on their faces.

Later, though, they decided to go to the hospital anyway, where they found that Chalarca had a broken tear duct. He might need surgery.

They are still in pain from the attack. “My head is killing me,” Chalarca said, “and my neck, I can’t even turn my head.”

Yesterday, they went to the LGBT Visitor Center in Miami Beach, where they were connected with LGBT-friendly police officers.

“They were very nice and helpful,” Logunov told South Florida Gay News. “Then we met with the detective, who leads our case, and he was nice and professional as well. Today’s experience with the police was much better.”

Police have released surveillance video of the attack, hoping to find the aggressors. The video shows four men walking together who police described as Hispanic white males between the ages of 19 and 24.

Police also released an image from another surveillance camera showing the attackers walking along a street.

Rodriguez called the attack “unnecessary” and “uncalled for.”

“This is a weekend on Miami Beach where we celebrate equality. Something like this is completely uncalled for and unnecessary and we really need to hold these people responsible, accountable.”

Regarding the allegations of police misconduct, a Miami Beach Police spokesperson said that the victims should file a complaint.

“The Miami Beach Police Department prides itself on its inclusion of everyone,” the spokesperson said. “If anyone feels mistreated by any of our officers, they are encouraged to contact MBPD’s Internal Affairs unit so that any complaint can be addressed immediately.”

Police have not said whether the attack is being investigated as a hate crime.

One of the victims told NBC 6 News that he believes it was a hate crime. “The way that we were dressed and everything, we were together. For me it’s, yes, a hate crime,” Chalarca said.

Gay couple says they were just holding hands when they were attacked on Miami Beach during Pride. @MiamiBeachPD looking for 4 suspects. @nbc6 pic.twitter.com/lCSMXP7GRf

Muller also said that he believes it was a hate crime.

“I want them to be proud for who they are and to know there’s people out there that care about gay people,” he said. “It doesn’t matter. I thought I was doing the right thing. I was trying, I didn’t do enough.”