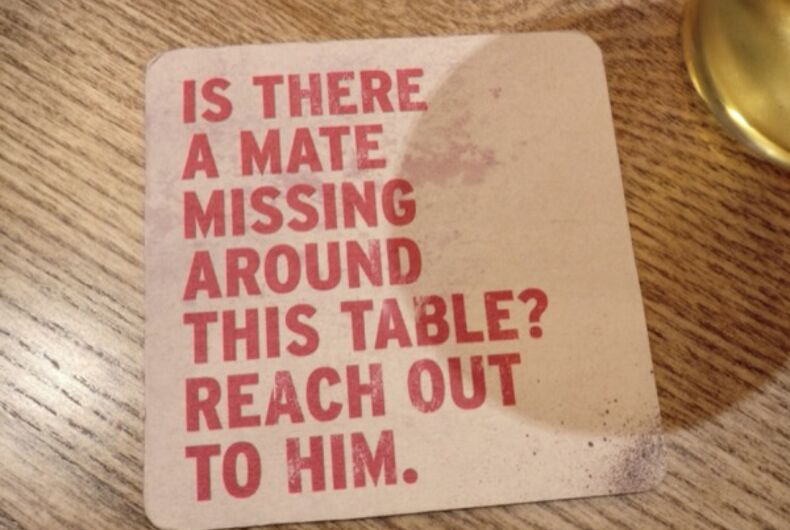 Beer coasters with a valuable message are making the rounds in social media, thanks to a viral tweet. The coasters are a project of the Time to Change project, a UK-based organization dedicated to changing attitudes about mental health.

These beer mats are SO needed. Suicide is the leading cause of death for men under 49, killing three times as many British men as women. It's time to talk about men's mental health!! pic.twitter.com/G43g56whyY

Bar culture has long been a part of LGBTQ life in America, from before the uprising at the Stonewall Inn in New York’s Greenwich Village to beyond the outcry over the massacre at the Pulse nightclub in Orlando, Florida. Our bars have long served as a “community center” where we can meet and socialize away from the judgments of the world at large.

Males in the United States are four times as likely to commit suicide, and are responsible for 79% of all suicides in the country according to the Centers for Disease Control and Prevention. There’s an ever-greater risk for gay and bisexual men. Suicide is also at critical levels amongst the transgender population.

The coasters are part of a five-year campaign launched this February by Time to Change, which seeks to, “encourage men to be in their mate’s corner and be more open and supportive of the 1 in 4 of us fighting a mental health problem in any given year.”

“Our research clearly shows that mental health problems are just not on the radar for men. However, we also know that men feel strongly about brotherhood and friendship and can play a vital role in looking out for their friends’ mental health and wellbeing,” Jo Loughran, Director of Operations at Time to Change, said.

“We want to show that being in your friend’s corner doesn’t have to be difficult or awkward. Breaking the cycle of men feeling unable to reach out has never been more urgent. We need to help men realise they can make a real difference, even change someone’s life.”

Per Time to Change’s website, men are less knowledgeable about mental health, and are more likely to hold negative attitudes on the subject. As a result, they are less likely to seek help. The mats seek to encourage people to reach out to their friends if they seem withdrawn.

Bar owners are encouraged to print out their own copies of the coasters from the Time to Change website.