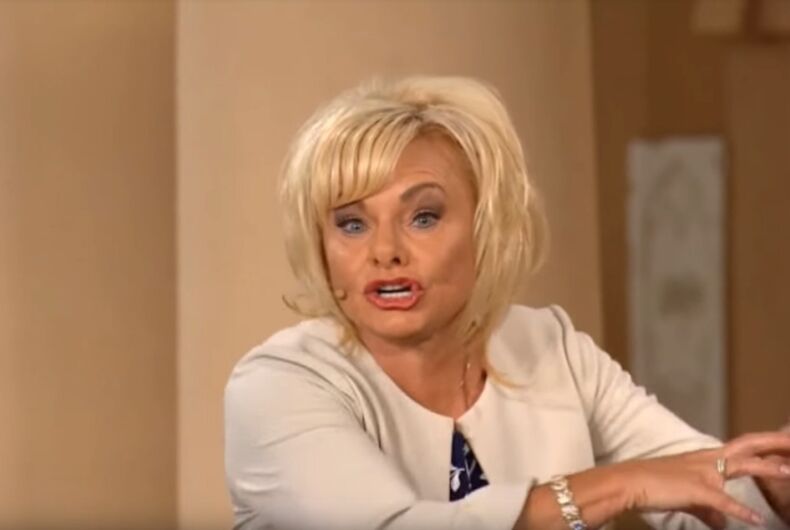 She “challenged” viewers to pray that they, and their families, be “cover(ed) in the precious blood of Jesus.”

“They stand up for -,” she began, before stopping herself, and continuing, “We know Vice President Pence does, and Karen does – they stand up unashamed of the gospel of Jesus Christ.”

She couldn’t quite bring herself to say the same for Trump and and the First Lady.

She then launched into her belief in upcoming punishments for that unabashed love of the Bible.

“Okay, if the world is thinking that we’re all mentally ill, you know what’s going to happen next? They’re going to put us all away in mental illness centers. I don’t know what word to use,” she claimed.

“It’s in the Bible. They’re going to do that. Matthew 24 is very clear,” Jim Bakker chimed in.

Bakker is referring to the passage where Jesus talks to his disciples on the Mount of Olives, talking about his return and the “end of the age,” saying, “Then you will be handed over to be persecuted and put to death, and you will be hated by all nations because of me.”

Watch Bakker give the warning below, via our friends at Right Wing Watch.

Meanwhile, speaking of brainwashing that is real and not imagined, Washington state is set to become the latest to ban the dangerous practice of anti-gay conversion therapy.

It is a glimmer of hope in what has been a sea of despair, thanks to the anti-LGBTQ administration the Bakkers are praising and helping prop up.

Pence’s apparent support for the practice of conversion therapy, based on a statement on his website when he was running for Congress, became an issue of heated debate when gay Olympic figure skater Adam Rippon noted it as part of why he felt it was inappropriate for the vice president to lead the Team USA delegation.