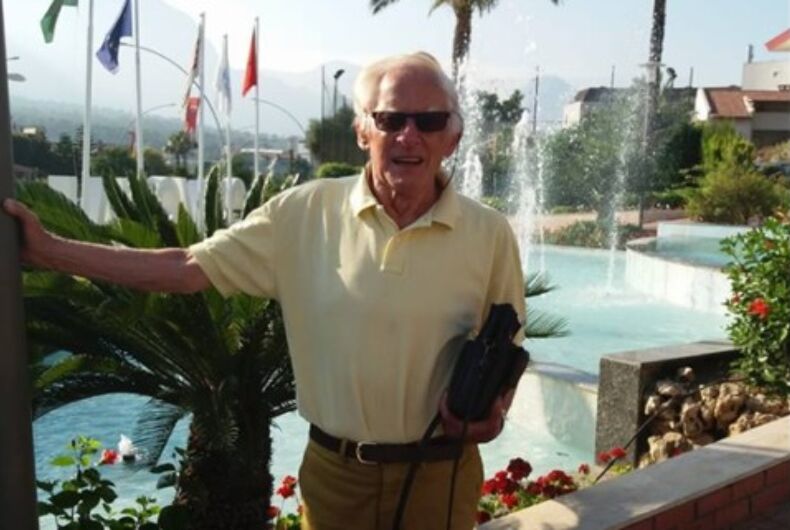 Philip Clements has rebounded with a new young loverPhoto: Facebook

The story of the retired gay priest, 79-year-old Philip Clements, who married a 24-year-old model, Florin Marin, and was subsequently left heartbroken and homeless, has a new development. Clements has rebounded from the breakup and has found himself a new lover, who is even younger than Marin.

Clements married Marin in a bizarre ceremony that betrayed Marin’s lack of interest.

Marin broke things off with Clements shortly after the older man put his home in his partner’s name, saying he wanted Marin to be secure after he died. Marin instead chose to make himself more secure while Clements was still above ground, kicking him out of his own house even though he had nowhere else to go.

Marin has since found a new man, 48-year-old Jeronimo Jesus de Vega, whom he says he likes more because he is younger and richer than Clements. Marin’s new boyfriend reached out to him on Facebook when he learned of his split from Clements.

Turns out, that’s the same way things started for Clements and his new man, a 22-year-old biology student from Romania he hopes will move to the UK to be with him.

Clements is living with his friend in Kent, and said the young student reached out to offer his condolences after hearing of his breakup with Marin.

“There was something about him that I liked – we got into texting each other and it went from there,” Clements said.

“I’m optimistic that there is a future beyond this terrible, devastating situation. I’ve got my church, my friends and family,” he added. “I’ve got this new partnership and hopefully he’ll be able to come over here and we can be together.”

He visited his new love interest, whom he has not named, recently and said the young man plans to come to UK when he finishes his degree.

“Age doesn’t matter to me,” he said of the 57 year age gap. “He’s learning from me about life and I’m learning from him – he preserves my youth.”

Adam Rippon goes on ‘Ellen’ to talk the Olympics, Pence, his crushes & working with GLAAD