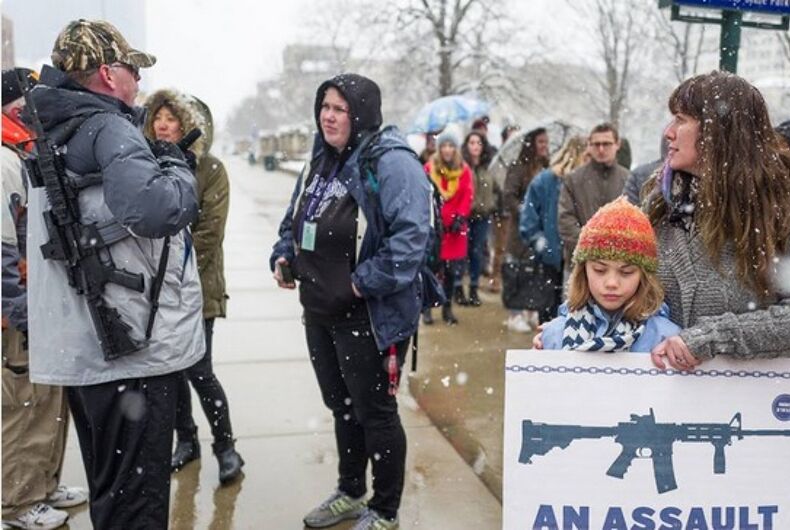 Has America reached a tipping point in the gun control debate? Will it be like the tipping point that we saw for marriage equality?

James Kirchick notes in the Washington Post that the comparison keeps being made. “Repealing the [Second] Amendment may seem like political Mission Impossible today, but in the era of same-sex marriage it’s worth recalling that most great causes begin as improbable ones,” wrote Bret Stephens in the New York Times.

Eleanor Clift wrote that people are now seeing the issue of gun violence as personal, in the same way that they came to see LGBT rights as personal because friends and family members came out. “The same kind of awakening is occurring around gun violence,” Clift wrote.

Others have noted that both the campaign against gun violence and the campaign for marriage equality rely heavily on moral language. “There is a moral element to the thing that has similarities to marriage,” activist Zach Silk told New York magazine.

The comparison is wrong, though. American politics are defined by one key feature that affects attitudes about guns but not marriage equality: racism.

Racism has been the fundamental divide in American politics dating back to at least the founding of the nation. Several major features of the Constitution – like the Electoral College and the 3/5 Compromise – were included to ensure the continuation of slavery.

While the Constitution gave the South an advantage in maintaining slavery, it wasn’t enough to keep the issue from dividing the country. The bloodiest internal conflict in U.S. history was the Civil War, which was about slavery. No other disagreement in the U.S. has ever caused as much death as this one.

In the mid-20th century, the two major political parties changed from a loose coalition of state and regional parties to parties with coherent, national platforms. It’s no surprise that the law that defined the contours of those parties more than any other was the Civil Rights Act of 1964.

When he signed it into law, President Lyndon Johnson said, “[Democrats] have lost the South for a generation.” Decades later, we know that he was understating its impact.

That’s how we got to the 2016 election, where a majority of white people from otherwise diverse backgrounds – men, women, working class, wealthy, married, single – supported a candidate who made direct appeals to white nationalism, while people of color of diverse backgrounds solidly voted against him.

That’s not to say that the conservative side of every single issue is based on racism. When the parties get defined, positions on major issues will inevitably fall along those lines as well (otherwise, there would be no controversy about them).

But gun control is one issue where the connection is clear.

A 2016 study found a link between racial resentment and gun ownership, and this relationship even transcended partisanship: the more racist a Republican or a Democrat was in relation to others in their party, the more likely they were to oppose gun control.

One of the authors wrote, “America’s gun problem is a white supremacy problem in disguise.”

Gun culture itself has its history in the antebellum South. Historian Richard Hildreth, in describing why the South had a lot more duels than the North did, said that Southern men were in the habit of carrying guns in public “as a protection against the slaves.”

This affected the South’s legal culture. Southern judges ruled and states legislated in favor of gun rights, while their Northern counterparts didn’t.

This history is important today. The Supreme Court’s 2008 Heller decision found an individual right to own a gun in the Constitution for the first time in American history. That decision relied heavily on Southern cases about guns to determine the “intent” of the Second Amendment, while ignoring what Northern courts were doing.

Which is why the only times conservatives have supported gun control was when they were trying to prevent African Americans from carrying guns.

Marriage equality doesn’t have a similar history, and neither does LGBT equality more generally. Sure, people who are racist tend to be more homophobic, and LGBT people found more support from people who were already fighting against racism since having a strong sense of social justice is associated with supporting equality for everyone.

But the connection isn’t foundational. Marriage equality is a stab at the heart of patriarchy, but not white supremacy.

It’s more likely that a hypothetical gun control law will be treated like the Voting Rights Act of 1965 – the right will never stop attacking it. They will go to the courts to overturn it, just like they did for the 2013 Shelby County decision that repealed a major part of the Voting Rights Act based on “equal sovereignty of the states,” a principle not found at all in the Constitution – just like an individual right to bear arms.

Real gun control legislation will only pass – and only stick around – when America addresses its white supremacy. Which is to say, not any time soon.

Here are the transgender people murdered in 2018