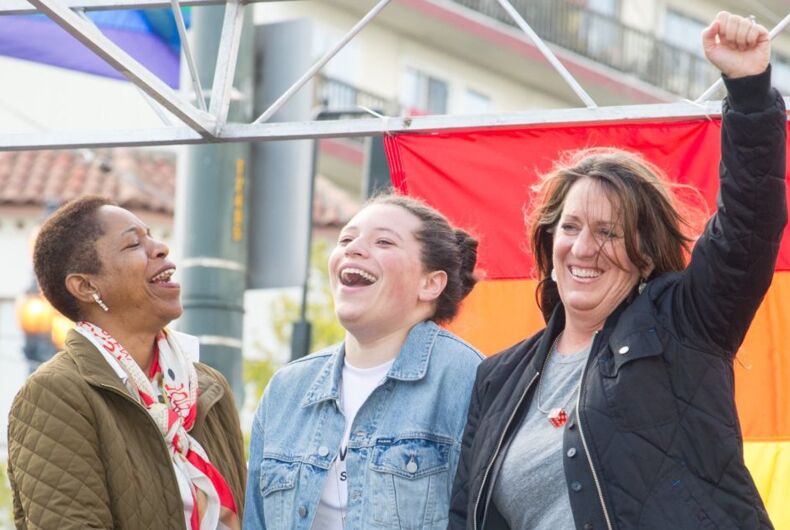 Kate Kendell (right), with her wife and daughter, at the 2015 marriage-equality rally in San Francisco. Photo: Courtesy National Center for Lesbian Rights.

Kate Kendell has more than just witnessed a transformation of the American landscape for LGBTQ people.

She’s been an agent of that change.

For more than two decades, she’s labored at the forefront, as executive director of the National Center for Lesbian Rights. Since 1977, NCLR has helped reshape the legal landscape for LGBTQ people.

It has led historic cases and causes, and it has advocated for legislation — on family law, on employment, on immigration, on a range of legal issues from transgender law to marriage, relationship problems and reproductive rights.

All the while, it has answered cries for help for LGBTQ people in need.

NCLR, with headquarters in San Francisco, and with Kendell at the helm, played a pivotal role in both the California and the national battle for same-sex marriage.

She has also put her passion into practice. Not once, but twice, Kendell recruited lesbian icons Del Martin and Phyllis Lyon to be the first couple to wed in San Francisco; first, in 2004, when San Francisco Mayor Gavin Newsom opened same-sex marriage during the Winter of Love, and again in 2008, after the California Supreme Court restored marriage equality.

Kendell officiated the marriage of her friend Jackie Biskupski, the out mayor of Salt Lake City, in 2016, and Kendell herself is married. She and her wife have children and a grandson.

Now, Kendell is stepping down. On March 15, after 24 years at NCLR, 22 of them as director, she announced she’ll leave NCLR at the end of the year.

On the day she announced her upcoming departure, Kendell shared some time with us to reflect, and to look forward.

LGBTQ Nation: Just what’s going through your mind on a day such as this?

Kendell: “Well, what I’m feeling and have been feeling in the days leading up to this, and now today, is a tremendous sense of gratitude that I had the honor and privilege of being an agent in the movement.

“I’ve been a beneficiary of my very own organization and a witness to, in many ways, a huge piece of our own liberation as it’s happening.

“It’s a very humbling and inspiring revelation to just look back and see that, over the course of two decades, there has been breathtaking change, and you got to be on the front lines of it.”

What prompted your decision?

“This is a long tenure by any measure, and for any leader of an organization, once you reach the 10-to-15-year mark, you start doing some stuff, some interrogation about whether you should stay, if you’re giving it your all.

“I started asking that question really seriously a couple years ago, when I hit 20 years.

“I really wanted to leave on my own terms — to leave when I felt I was at 110 percent, but also leave at a time that I could position the organization to move into a next generation or chapter.

“Those pieces all fell together. I helped NCLR come this far, and now a new leader, a different kind of leader, with maybe some experiences different from mine, will start a forward path.”

What do you see as your crowning achievements?

“One is a sort of broad observation about who NCLR is. I do think NCLR has been part of leading the conversation — not just around greater inclusion, but an appreciation that, in order for us to do our best work as queer organizations, we need to take account of people’s multiple identities.

“It is true. LGBTQ people are everywhere, and so that means we need to attend to disparities in income, in health care, in criminal justice, in economic opportunities.

“I feel like NCLR has lived at those intersections. It’s part of our DNA, and part of a larger conversation in the movement.

“In terms of case work, when I started 24 years ago, as legal director, we were still getting a dozen calls a day from women and men who’d lost custody of their kids. Go from that moment to winning same-sex marriage — to a few months ago, at the Supreme Court, admonishing Alabama to comply with Obergefell (the 2015 landmark decision Obergefell v. Hodges, which recognized same-sex marriage).

“We have literally transformed family law in this country. We’re not alone, but clearly our fingerprints and our mark is all over that work.”

Does something ever happen to make you think how far we’ve come?

“Oh, multiple times a week. I feel honored to do this work. This puts me in the frame of mind to be reflective of what I’ve witnessed and the rapidity which which we’ve seen a sea change in the legal and cultural acceptance and embrace of LGBTQ people.

“We still have a tremendous amount of work to go. Every day, we get calls from people because of where they live, their economic circumstances, their gender identity, their family’s religion. They’re terrorized, particularly with this administration.

“But, by any measure, the change we have seen in 24 years has been breathtaking.”

“I expected backlash because there is always a backlash to significant gains for us to be our better angels and to provide a better level of justice and equality as our constitution requires.

“The backlash is actually less on the issue of marriage itself. Yes, you have Alabama. That has clearly gone off the rails and may not even issue marriage licenses.

“But most states, and most of the country, have come to terms with the fact that this is the status quo. In another 10 years, even five years probably, I don’t see that as a contested issue again.

“They view, with tremendous skepticism, anyone who’s different from themselves. Not only is that not good for LGBTQ people generally, but it’s so toxic for our country.

“Navigating that, for LGBTQ people, and for who we are as an American family going forward, is going to be challenging for every movement.

“But because of our experiences as LGBTQ people, we might be in a unique position to serve as both bridge-builders and translators on how to navigate this moment.”

Historically, the gay-rights movement has largely been a white movement. How do we move forward on diversity?

“Part of the reason we maintain our name, as the National Center for Lesbian Rights, even though we are an LGBTQ organization, is in recognition of that fact that lesbians still lag in terms of money, influence, positions on boards, leadership in the movement, and our place in the culture generally.

“We want to elevate lesbian leadership and empower lesbians to occupy more of those spaces.

“In the time that I’ve been at NCLR, I’ve seen an enormous shift. We’re still not where we need to be, and we woefully represent LGBTQ people of color, but I think there is a growing recognition and conversation that we do this at our peril.

“If we’re going to be relevant organizations and a relevant movement, we have to be reflective of who is LGBTQ. We have to make opportunities for leadership and engagement, with a set of leaders and individuals who may not have our backgrounds, the same racial identity or the same gender identity.

NCLR is recognized for being at the forefront of transgender rights. Is that your assessment as well? How did that happen?

“I do think that’s fair. We were definitely the first organization to have a trans person transition while on staff, and that’s our legal director, Shannon Minter. He’s our long-time legal director. He was here before I was.

“About a year into my tenure as executive director, he told me he was going to begin transitioning. So we definitely had the first individual who transitioned on the job, and I think we were the first organization to employ full time a transgender staff member.

“This is why representation matters. Having Shannon on staff has had the effect that you’d think it would have. It’s made us more conscious of and more effective and credible advocates for transgender issues. Now our trans work comes across all our program areas — family, immigration, sports, youth.

Where are we now in the fight?

“I think we have achieved breathtaking and, in some ways from a perspective of 20-plus years ago, unimagined victories. That’s measured not just by legal wins, but by the pace of the representation of LGBTQ people in the larger culture.

“You can turn on the TV, on any evening, and network television will have gay characters, lesbian characters, transgender characters and performers.

“In almost every state there is an out LGBTQ person in leadership. There’s even a lesbian and a gay man on the city council of Ogden, Utah, my hometown.

“What we’ve seen and how we’ve occupied this great space, being out and being visible and living openly — that’s the greatest antidote to hate and bigotry.

“And while I don’t want to minimize the damage and the danger that that still exists for a lot of LGBTQ people in this country, we are more than heading on the right trajectory, as long as we don’t become complacent, let up or prematurely declare victory.”

What do you plan to do next?

“It’s a little bit unclear. I very much want to set up my own shop and knit together different gigs: consulting, teaching, writing. I plan a sabbatical in July and August, and hopefully I will have a clearer answer at the end of that.

What lessons do you have for us, Kate?

She laughed. “I don’t feel like I’m presumptuous to suggest or give unsolicited advice.”

She then paused. “But what I can say is this. No matter what you do, living in a space of gratitude and humility will make you much better at whatever you do. It will give you space to take joy in the moments you might otherwise miss.

“I feel like I’ve been living in that space for much of my tenure here, which is why I am filled with such an enormous sense of honor that I got to do this work — and an awareness that I’ll never have anything like this again in my life.

“But I also have the satisfaction and appreciation of how lucky I am.”