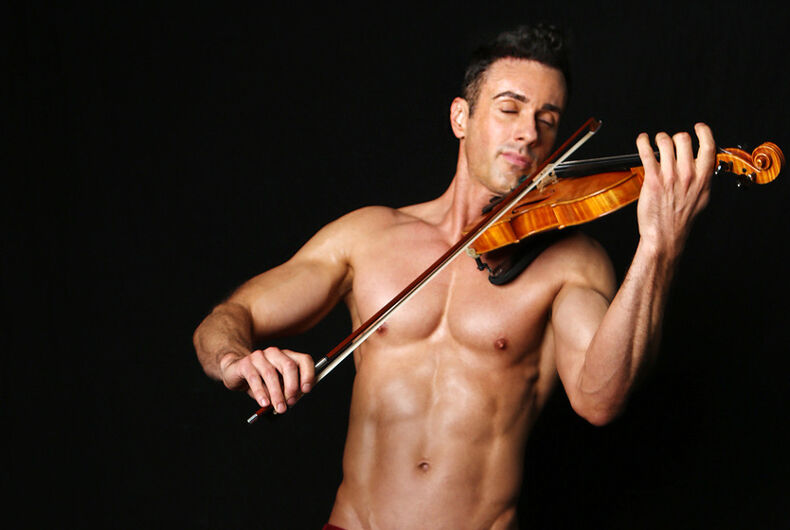 Matthew Olshefski knows that. Better known by his online moniker, the Shirtless Violinist, Matthew has strummed and bowed his way to online infamy more for his torso than his musicianship, which isn’t bad either.

Now boasting more than 3,400 followers on Twitter and another 12,000 on YouTube (where his videos have grabbed 1.4 million views), the Shirtless Violinist has become an ironic one online phenomenon of sorts.

We took a few minutes to chat with an out-of-character Matthew about music and fitness.

I just watched some of your videos. What’s your first passion, fitness or violin?

I have always had a love of fitness, but music is my first passion in life. Being fit and healthy makes me happy, but the violin is what brings me real joy.

When did you start?

I began lessons at the age of 3! As the story goes, I saw a violinist on TV and was mesmerized. Fortunately, my parents took the hint and sought lessons. I started right away!

Did you study violin to play professionally?

Yes. From an early age, playing professionally was my sole aspiration. I went on to play in symphonies, chamber orchestras, opera orchestras, and ballet orchestras, as well as record music for movies, television, and video games.

Stealing a kiss from my love 😍 Don you kiss and tell?? #kiss #kissing #kissandtell #boyfriend #😘

A post shared by The Shirtless Violinist (@shirtlessviolinist) on Oct 9, 2017 at 3:55pm PDT

So then how did the “gimmick” of playing shirtless come about?

I had always wanted to make beautiful music videos on YouTube, but I didn’t know where to start. Then I met my boyfriend, Paul, and told him about my idea. It turns out that Paul had always wanted to make YouTube videos but he didn’t have a subject. We immediately set out to shoot our first music video, but not before Paul threw out a random idea: You look great without a shirt, do it shirtless. Initially I balked at the concept, but Paul can be persuasive. I just thought – what the hell. It might be fun, and thus “The Shirtless Violinist” was born.

When did you start the videos?

We shot the first video two summers ago. Paul and I planned a road trip from Seattle to San Francisco and stopped at as many “beautiful spots” as we could find. We shot the entire thing on an iPhone 6 and I recorded the music directly into my laptop. It was an amateur production to say the least, but we had a blast filming it.

I’m at the gym 6 days a week for about two hours. I switch up my work outs every four weeks to keep things fresh. I love the gym and I call it my second office. I also practice six days a week for about the same amount of time. I typically have three or four music videos in some stage of production at all times, so a practice session includes working on all the latest songs.

How much time do you spend on social media posts?

I’ll be honest, the first answer that came to my mind was “too much,” but the reality of today is that artists and musicians have to work hard to keep their social media fun, fresh, and relevant. Engaging with fans is so important. I have learned to set specific time aside to get things done, but it’s a big part of my daily life.

Has this character consumed your life?

Short answer, yes! The Shirtless Violinist takes up a big part of my life, but thankfully its something that Paul and I share. Every social media post, YouTube video, and sponsorship opportunity is a collaboration between the two of us. This whole persona has bloomed into a small business that I own with someone I love, so I feel very lucky.

What do they cost to produce?

For over a year now, my music videos have been entirely crowd-funded through a site called Patreon. This is a platform which allows fans to make monthly pledges toward artists they want to support. If it weren’t for these dedicated supporters, I would never be able to keep these videos coming. Presently my monthly video budget is about $800 and I use every penny of it. We have gradually developed a passionate team of creative people who love bringing these music videos to life.

Do you do live shows?

There is nothing I love more than performing live! I’ve been playing the violin for live audiences for most of my life, and it’s a very special experience for me. Having the instant connection between the music and the listener is the best part of what I do.

Do you do them shirtless as well?

I have played on stage with talented artists like Andrea Bocelli and Josh Groban – but that was back in my shirt-wearing days. Ultimately, my hope is to go on tour as The Shirtless Violinist, but I am in the early planning stages.

Obviously you’ve attracted a good sized social media following, which has led to some product endorsements and TV appearances. Do you feel like you’ve become famous?

God no. It’s very surreal for me to see how this act has evolved and garnered attention. I constantly feel humbled by this entire experience.

Do you get recognized often?

Far from “often”, but it has happened. Most recently it was the flight attendant on a trip to LA. It turns out he followed me on Instagram, and sent me a message after I departed the plane. He said he was too shy to say hello! I thought that was pretty adorable.

Does including your boyfriend in your videos affect your relationship?

Here’s something about my boyfriend, Paul, that will surprise you: He’s legally blind. He has a rare disease called Retinitis Pigmentosa and he’s in the process of losing all of his vision. It was always his dream to be a filmmaker, but due to his vision loss he abandoned that possibility. Now, with the creation of The Shirtless Violinist, he’s living out his dreams and I’m living out mine! As you said, he even stars alongside me in some of the videos and those are easily my favorite ones. This journey has meant a lot to us as individuals, and even more as a couple.

Do you still need a regular 9-5 job, or are you making a living off your videos and music?

I’ve been teaching violin for over a decade, and it’s still what I call my day job. My students range from 2 and a half to 84, and I love being their teacher. Always with a shirt on, of course.

From the very start, this idea was about reaching people who would otherwise never give the violin a second listen. I feel like I am succeeding in attracting a new kind of audience, and that’s what matters most to me. My goal is to see this audience continue to grow, and to have a lot of fun while I’m doing it! Classical music and classical instruments don’t have to be stuffy – they can be sexy, too. I think I’m proving that, and I know my fans feel the same way.

Do you take requests? Because I’d seriously love to hear you cover a song by my favorite band, HOLE. Preferably either “Violet” or “Plump.” It would just be the pinnacle of all irony and awesomeness.

That’s an amazing idea! I think Courtney Love is very electric on stage – if I could channel some of that energy I would definitely consider a cover! Besides, “irony and awesomeness” has pretty much been my motto since day one.

One of us: St. Patrick’s place in gay history

Tony Perkins says liberals want to ‘shame’ evangelicals. They should be ashamed.