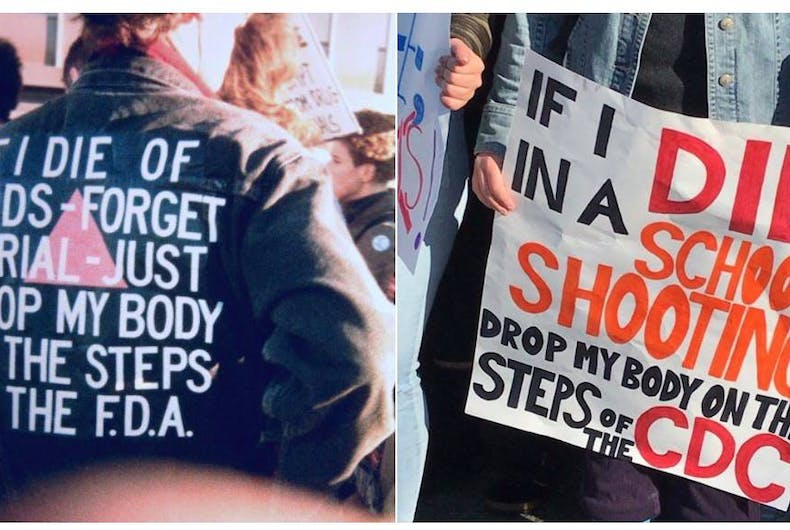 The similarities between activists fighting AIDS and in favor of gun reform are striking.Photo: Facebook

“Mass shootings at predominantly white schools draw the most attention from journalists and lawmakers, but The Post has found that children of color are far more likely to experience campus gun violence — nearly twice as much for Hispanic students and three times for black students”, The Washington Post wrote recently.

While black students comprise 16.6% of the student school population in the United States, they experience school shooting at the rate of 34.1%. In most incidents where students of color were exposed to shootings in schools since 1999, the majority were targeted or in some cases accidental, rather than random.

The media now extensively cover the mass shootings with increasing rapidity in schools and some communities like the Las Vegas Country Music festival, exposing horrifying images on our TV screens and print outlets.

Especially since the Columbine High School massacre in 1999, through Sandy Hook Elementary School and Marjory Stoneman Douglas High School, parents and other advocacy groups, with the great infusion of courageous and committed young people, have stepped up and taken the lead in a newly energized movement for firearms safety regulations.

While black people comprise 14% of the U.S. population, however, they are victims of more than 50% of all gun homicides. Of the average 13,000 people murdered each year with guns, black men are 13 times at higher risk than are white men.

Our current times recall the early years of the HIV/AIDS epidemic in the 1980s when gay and bisexual men were considered as those primarily affected. It was a time of virtual silence by powerful government leaders and scientific researchers. San Francisco Chronicle reporter, Randy Shilts, in his book And the Band Played On, answered the question why:

“No one cared because it was homosexuals who were dying. Nobody came out and said it was all right for gays to drop dead; it was just that homosexuals didn’t seem to warrant the kind of urgent concern another set of victims would engender….Scientists didn’t care because there was little glory, fame, and funding to be had in this field….Nobody at the National Cancer Institute seemed to be in much of a hurry. The new syndrome clearly was a very low priority, even as it was becoming clear to more and more people that it threatened calamity.”

One can reasonably argue that if most people with HIV/AIDS initially had been middle-class, white, suburban heterosexual males, rather than gay and bisexual males, trans people, people of color, working-class people, sex workers, and drug users, we would have immediately seen massive mobilization to defeat the virus.

Well, today, since white young men comprise most of the school shooters in primarily white middle-class schools and communities, we are finally seeing massive mobilization to deal with the problem of gun violence.

Stigmatized and marginalized groups, however, live with the constant reality of arbitrary and unprovoked systematic violence directed against them simply on the basis of their social identities. The intent of this xenophobic violence is to harm, humiliate, and destroy the “other” for the purpose of maintaining hierarchical power and the attendant privileges.

On February 26, 2012, George Zimmerman, a neighborhood watch leader in Sanford, Florida, shot and killed 17-year-old Trayvon Martin. Martin was walking on the sidewalk talking on a cell phone to his girlfriend and carrying a can of iced tea and a small bag of Skittles when Zimmerman confronted and shot him, and then he claimed self-defense.

By most reports, Martin’s “crime” was walking while being black in a predominantly white gated community visiting family and friends. His stigmata included his black skin, his youth, and wearing a hoodie.

Black parents from all walks of life throughout the country engage with their sons in what they refer to as “the talk” once their sons reach the age of 13 or 14 instructing them how to respond with calm if ever confronted by police officers. Parents of these young men know full well the stigmata embedded into their sons by a racist society marking them as the expression of criminality, which perennially consigns them to the endangered species list.

In the wake of the killing of Trayvon Martin, 32-year-old Iraqi American Shaima Alawadi was the victim of a brutal hate-inspired murder in her San Diego, California home. On March 24, 2012, Alawadi’s eldest daughter, Fatima al-Himidi, found Aalwadi “drowning in her own blood,” beaten with a tire iron. A note near Alawadi bloodied body read, “Go back to your country, you terrorist.”

We witnessed the brutal police chokehold death of Eric Garner, the multiple-bullet police killings of Michael Brown, Tamir Rice, and Stephon Clark, the vigilante death of Trayvon Martin, the execution-style murders of three Muslim students in North Carolina — Deah Shaddy Barakat, a dental student, his wife, Yusor Mohammad Abu-Salha, and her sister, Razan Mohammad Abu-Salha – the destruction by arson of a building at the Islamic Institute in Houston, Texas, and the ever-increasing number of murders of primarily trans women of color.

And these are merely just a few of the most visible examples of this form of violence against unarmed members of stigmatized groups, primarily people of color.

Earlier we witnessed the brutal attacks on Rodney King in Los Angeles, the barbarous slaying of James Byrd, Jr. in Jasper, Texas, and the fierce rape and murder of Cherise Iverson, a 7-year-old girl in a Las Vegas casino bathroom.

We must not and cannot dismiss these incidents as simply the actions of a few disturbed and sadistic individuals or to a limited number of “bad cops,” for oppression exists on multiple levels in multiple forms.

The killers live in a society that subtly and not-so-subtly promotes intolerance, spreads stereotypes, imposes stigmata, and perpetuates violence and the threat of violence. These incidents must be seen as symptoms of larger systemic national problems.

In these times of declining social mobility, and as the gap between the rich and the poor ever widens, dominant groups attempt to divide the dispossessed by pointing out scapegoats to blame. For example, vigilantes sometimes calling themselves members of the so-called “Minutemen” movement target and hunt down anyone suspected of entering this country undocumented.

We are thus living in an environment in which property rights hold precedence over human rights. Metaphorically, oppression operates like a wheel with many spokes. If we work to dismantle only one or a few specific spokes, the wheel will continue to roll over people.

In the final analysis, whenever anyone of us is diminished, we are all demeaned, when anyone or any group remains institutionally and socially stigmatized, marginalized, excluded, or disenfranchised, when violence comes down upon any of us, the possibility for authentic community cannot be realized unless and until we become involved, to challenge, to question, and to act in truly transformational ways.

The latest ‘cure’ for being gay is fermented cabbage juice. It doesn’t work.