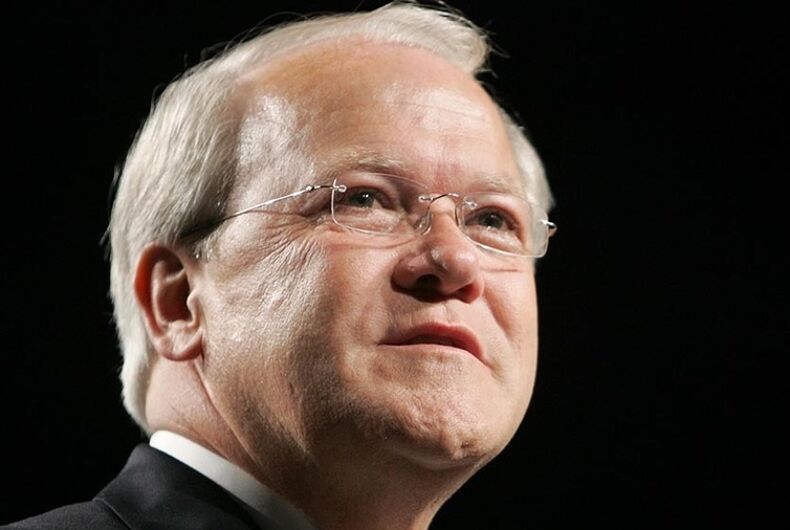 A leader in the Southern Baptist Convention (SBC) resigned earlier this week citing his involvement in a “morally inappropriate relationship.”

Frank Page was the President and CEO of the SBC until this past Tuesday. Initially, he said he was just retiring, but then Stephen Rummage, chair of the SBC’s Executive Committee, released a statement saying that Page is actually leaving in disgrace.

“Today, I spoke with Dr. Page and learned that his retirement announcement was precipitated by a morally inappropriate relationship in the recent past,” Rummage said in the statement. “This news will, we understand, bring great sorrow. I have shared with the Executive Committee officers what Dr. Page shared with me, including Dr. Page’s repentance and deep regret that his actions have caused pain for others.”

Page then released a statement of his own. “Out of a desire to protect my family and those I have hurt, I initially announced my retirement earlier today without a complete explanation,” he said.

“However, after further wrestling with my personal indiscretion, it became apparent to me that this situation must be acknowledged in a more forthright manner,” Page continued. “It is my most earnest desire in the days to come to rebuild the fabric of trust with my wife and daughters, those who know me best and love me most.”

Southern Baptist churches have been very supportive of Donald Trump – whose extramarital affairs are well-known – and many even withheld contributions to the SBC when a leader criticized Trump, which forced that leader to apologize. This has led people to speculate about what Page could have done that would force him to resign from the SBC.

Neither the SBC nor Page has specified the nature of the “morally inappropriate relationship,” whether it involved a sex worker, an underage victim, a family member, a male partner, multiple partners, or a married woman.

The wording of his statement, though, gives the impression that Page’s wife was not aware of the relationship.

In 2014, the SBC kicked out an LGBT-friendly California church. The SBC’s structure generally leaves theological matters to be decided by local churches, but the SBC decided that the New Heart Community Church did not “meet the definition of a cooperating church” because it chose to “to affirm, approve, or endorse homosexual behavior.”

Page supported the decision, saying that the “action does not reflect a lack of love for homosexuals.”

“When you love someone, you tell them the truth about their actions,” he said. “By its action on behalf of the convention, the Executive Committee is telling New Heart that its failure to condemn homosexuality breaks the heart of God.”