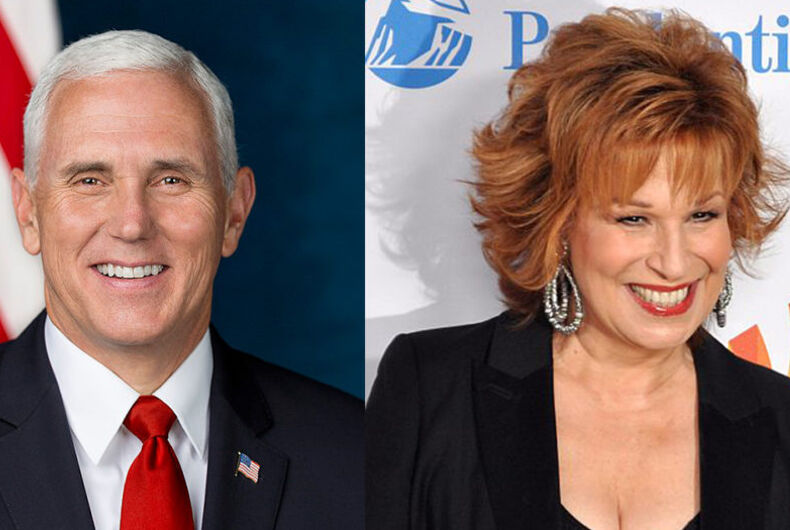 Vice President Mike Pence isn't satisfied with Joy Behar's apology to him, and wants her to apologize to all ChristiansPhoto: Joy Behar photo by Nick Step (CC license 2.0)

Mike Pence is wearing his best pained, concern trolling expression again, demanding an apology from Joy Behar over remarks that if you hear Jesus talking to you, that is to say if you hear voices, you might suffer from mental illness.

Pence has already accepted an apology from The View co-host, possibly on orders from the network, because, as he said, that’s what a good Christian does, but if you give a mouse a cookie…

“I thought it was important that I defend the faith of tens of millions of Americans against that kind of slander, and I did so,” Pence said, with self-congratulatory vigor while appearing on Fox with Sean Hannity.

“I give Joy Behar a lot of credit,” he went on. “She picked up the phone, she called me, she was very sincere, and she apologized. One of the things my faith teaches me is grace, forgive as you’ve been forgiven.”

While Pence did graciously accepted that apology, he added that he encouraged her “to apologize to tens of millions of Americans who were equally offended,” speaking on their behalf.

“I don’t know that I want my vice president, um — speaking in tongues and having Jesus speak to him,” co-host Sunny Hostin said during a February 13 episode of the show.

“It’s one thing to talk to Jesus. It’s another thing when Jesus talk to you,” Behar jumped in to add. “That’s called mental illness, if I’m not correct. Hearing voices.”

“To have ABC maintain a broadcast forum that compared Christianity to mental illness is just wrong,” Pence said. “It is simply wrong for ABC to have a television program that expresses that kind of religious intolerance.”

“I think Vice President Pence is right. I was raised to respect everyone’s religious faith, and I fell short of that. I sincerely apologize for what I said,” she offered.

.@JoyVBehar: “I think Vice Pres. Pence is right. I was raised to respect everyone's religious faith, and I fell short of that. I sincerely apologize for what I said.” pic.twitter.com/lhiYHdPlxK

While it would be easy to blow this story off as tabloidy “liberal celebrity beefs with Pence” click-bait nothingness, there are larger implications than just the sensitivity of Pence specifically and Christians generally.

The larger issues here, especially as it pertains to the LGBTQ community, are “religious freedom,” or as it could also be considered the political power of the religious, and freedom of speech.

While it is important to keep in mind free speech doesn’t protect you from getting in trouble at work, or even fired, the chilling effect of the sitting vice president suggesting a network shouldn’t air criticism of his brand of religious belief is notable and worrisome.

Particularly when considered in conjunction with the hypocrisy of the Trump administration wading into the Masterpiece Cakeshop case before the Supreme Court, siding with the baker, Jack Phillips, who refused to make a cake for a same-sex couple. While he argued it went against his religious beliefs, the case is being argued not on religious freedom grounds, but rather on free speech grounds.

The defense is arguing that to make Phillips provide a cake for a same-sex wedding would go against his free speech rights as a creative individual. Meanwhile, Behar, a comedian and commentator, should not be allowed to question the legitimacy of hearing Jesus Christ speak to you?

Whether Behar’s apology is sincere or not is anyone’s guess, it well could be, but the fact that she was likely required to give one or else risk losing her job should be on our radar.

This may seem like an isolated incident, and on the surface perhaps even sensationalist, its implications are far reaching, and what it reveals about this administration should concern anyone interested in legitimate free speech.

What can hip hop & Oprah teach us about dealing with Trump?