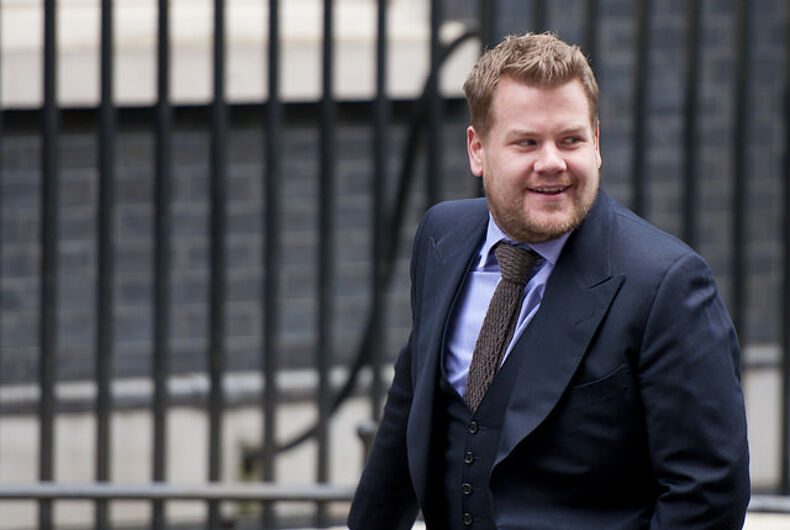 James Corden explained how he would tell his kids about gay people, if they would ever ask, and it’s beautiful.

The host of The Late Late Show, and father of three, was interviewed by Attitude magazine for their next issue. In the interview, he said that his six-year-old son Max has never asked about gay relationships.

“They haven’t brought it up, but we have lots of gay friends – like our friends Chris and Mark – who have come over a lot and stayed with us,” he said. “I think my son has never questioned it as it’s always been there.”

Well, what if he did ask about it?

“And if he did, I would know what those answers were, which is that these are simply two men that really love each other in the same way I love Mummy and Grandma loves Grandad and that’s it.”

One of Christian conservatives’ favorite arguments against LGBTQ equality is, “I don’t want to explain that to my kids.”

It’s an infuriatingly awful argument. Discrimination is OK because otherwise…you would have to talk to your kids? The horror.

Corden said, “No one is born wanting to dislike anyone.”

It’s the parents who have a problem with it.

Corden also discusses the well-received sketch he performed on his show in response to President Trump’s attempts to ban transgender people from the military in the Attitude interview.

“That’s one of the biggest political points we’ve made as a reaction to something currently happening under the Trump administration,” he said. ““What we always try to do is to think, ‘What is our show’s point of view on this?’ Because you can stand up and make a statement or you can sit on a desk and make a statement but we’re thinking, ‘What is the way that our show can do that?’”

“I was very proud of it,” he concluded.

Donald Trump: Everyone should have had a gun at the Pulse nightclub