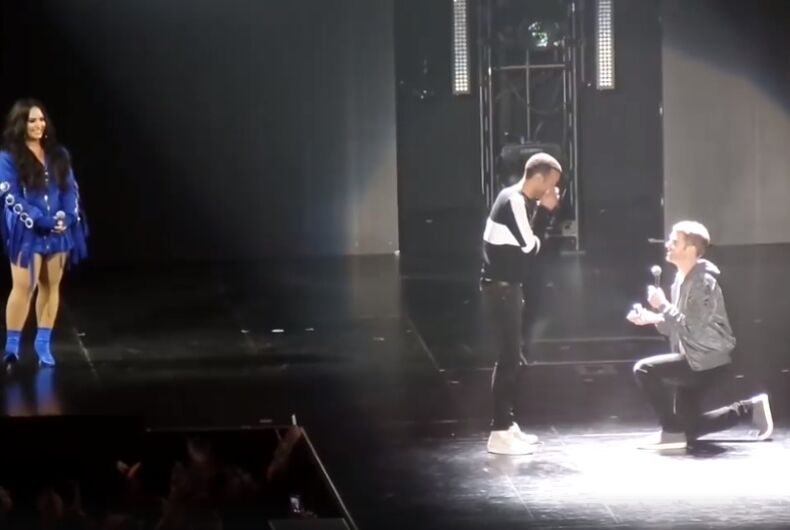 Demi Lovato helped her friends make a memory they will never forget, in front of an audience of cheering fans, and it was perfect.

Over the weekend, while in Los Angeles on her “Tell Me You Love Me” tour, Lovato said she would need help from the audience with her next song. Then on came Rayvon Owen, an American Idol top four finalist, whom she greeted with a hug.

After introducing Owen to the crowd, she asked him who he came with, and noted that his boyfriend, activist and filmmaker Shane Bitney Crone was nowhere in sight.

“Shane, where you at?” Owen asked, before Crone came floating up from a trap door on stage, sending Owen to the floor with shock. He finally was able to pick himself up and join Crone who took his hand, and told him, “I thought that I could never love again.”

Crone lost his partner, Tom Bridegroom, who hosted MTV’s The X Effect, to an accidental fall. Bridegroom’s family was not accepting, and kept Crone from attending his funeral, threatening him with violence. The video he made about his experience went viral, which led to the feature-length documentary Bridegroom.

“But I really fell in love with everything about you,” Crone told Owen, telling him he inspires him every day.

He then dropped to one knee and asked Owen to marry him. And he said yes.

Lovato then launched into her song “Yes,” while photos of the couple were displayed on a screen behind her.

Crone said that while he was struggling with mental illness and depression he felt hopeless, especially in regards to love, but that Lovato’s music kept him going, making the moment that much more special.

“I’m still in tears,” Owen wrote on Twitter. “Last night was hands down the happiest night of my life.”

@RayvonOwen, I can’t wait to spend the rest of my life with you, and I am beyond thrilled to officially call you my fiancé! You’ve made me a better man and I’ll forever be grateful to you for loving me unconditionally. I know with all of my heart that Tom would be so happy for us, and I thank you for honoring and respecting the fact that he will always be a part of my life. —————————————————- I have to give a huge thank you to @ddlovato for being a supportive friend and for helping make last night possible. It was one of the greatest moments of my life! I also want to thank you for all that you have done and continue to do for young people, and particularly the LGBT community. Your heart, your voice, and your activism make everyone feel accepted, less alone, more empowered and more hopeful. ❤️ —————————————————- Thank you to @matthew_scott_montgomery, @sirahsays, @adreeneyc, @kelseykershner and Demi’s team for helping pull last night off and thank you to everyone out there who has supported me, as well as my relationship with Rayvon. Your support through the years has not gone unnoticed and I would not be where I am without all of you. ❤️🏳️‍🌈#LoveIsLouder #LoveWins #TellMeYouLoveMeTour

i said yes… 😭💍❤️🌈 • hands down the happiest night of my entire life. @shanebitneycrone, i am beyond excited and honored to spend the rest of my life with you. • thank you @ddlovato for making this a moment that i will absolutely never ever forget 💕 #tellmeyouloveme #tellmeyoulovemetour #engaged

Is Scott Pruitt the most homophobic member of Trump’s cabinet full of deplorables?