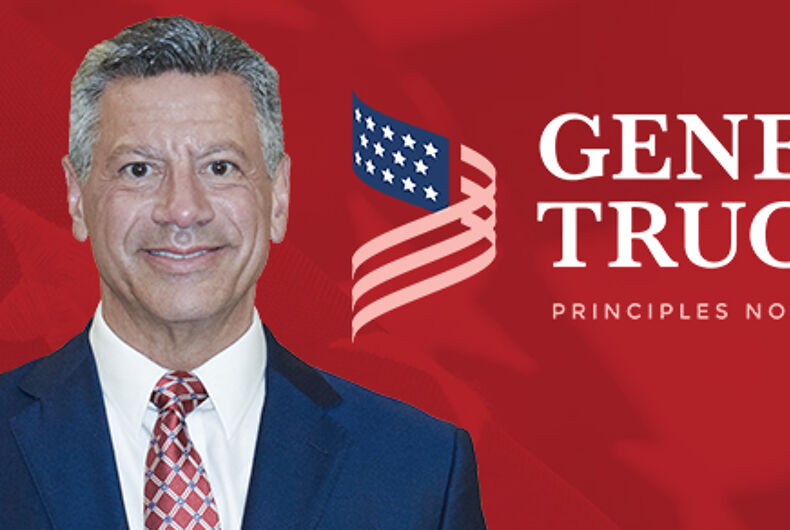 A gay Republican and a lesbian Democrat are running to unseat Democratic Delaware Sen. Tom Carper.

Eugene Truono, 59, a former chief compliance officer for PayPal, is the sole GOP candidate at this point. His primary opponent on Sept. 6 was Republican Chuck Boyce, 49, a small-business owner, but Boyce ended his candidacy March 1 after citing unspecified health concerns.

Running against Carper in the Democratic primary is Kerri Harris, 38, a U.S. Air Force veteran, civil-rights activist and mother of two. Harris, co-founder of the Delaware Civil Rights Coalition, announced her candidacy on Feb. 10.

If Truono wins, he would become the first openly gay Republican to win elected office in Delaware.

If Harris wins, she’d be the first biracial lesbian elected to Congress.

They join a growing number of LGBQT candidates up and down the ballot in races across the country. Neither Truono nor Harris have yet been endorsed by the Victory Fund, which supports LGBTQ candidates.

Both Delaware candidates, however, face a long-time U.S. senator with a formidable war chest and a high marks on LGBTQ issues.

Running for his fourth term, Carper, 71, has served since 2001. He’s a former governor and former U.S. representative, with $800,000 in his campaign fund at the end of last year.

Carper has had a top rating from the Human Rights Campaign for the past two sessions. He was among 46 senators to introduce legislation to ban discrimination against LGBTQ Americans in May 2017.

“One of my core values, whose power I am reminded of time and time again, is the Golden Rule. I believe we have a moral obligation to treat others the way we would want to be treated,” Carper said in a press release on the legislation.

“The Equality Act is about the Golden Rule, ensuring that all Americans — regardless of their sexual orientation or gender identity — have equal protection under the law from unfair discrimination.”

Truono, on the other hand, stresses traditional Republican issues.

“This campaign isn’t about me being gay,” Truono said to Delaware Online on Feb. 20. “It’s about bringing conservative principles to Washington from Delaware. It’s about pushing things like tax reform, jobs and healthcare reform — things I think people really care about.”