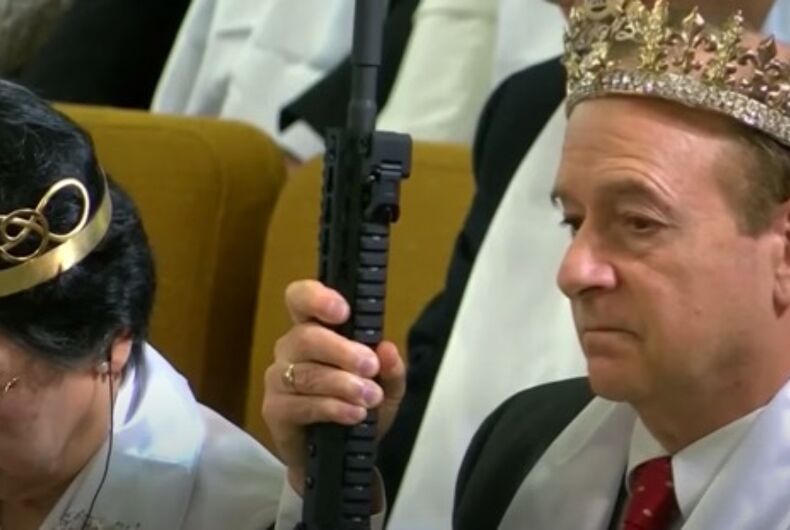 The cult-like World Peace and Unification Sanctuary in Newfoundland, Pennsylvania had an offensive and ludicrous mass ceremony to renew members’ wedding vows – or marry them for the first time – and encouraged them to bring their AR-15s to be blessed along with them.

The church said they were blessing the couples and not the guns. Because that would be silly, obviously.

Wearing crowns of bullets, worshippers drank wine and venerated the assault rifles. The church believes the gun symbolizes the “rod of iron” mentioned in the Book of Revelation.

Nikolas Cruz, the alleged shooter in the Florida high school massacre, used an AR-15 to mow down students and teachers. Calls for the gun and similar military-style weapons to be banned have grown louder following the attack.

The Christian church is an offshoot of the late Rev. Sun Myung Moon’s Unification Church. Both are considered cults by critics. The Unification Sanctuary is run by Moon’s son, Rev. Sean Moon.

The Unification Church has strong ties to conservative Republicans and is no stranger to controversy. Both groups have made pro-gun rhetoric a part of their sermons and teachings in recent years. The church also owns Kahr Arms, a handgun manufacturer.

According to the Southern Poverty Law Center, both church’s ideology is racist, homophobic and anti-semitic. Neither group supports marriage equality – with or without an assault rifle.

Mass weddings are common for the cult. Critics allege many members are forced into marriages with people they have never met until the wedding.