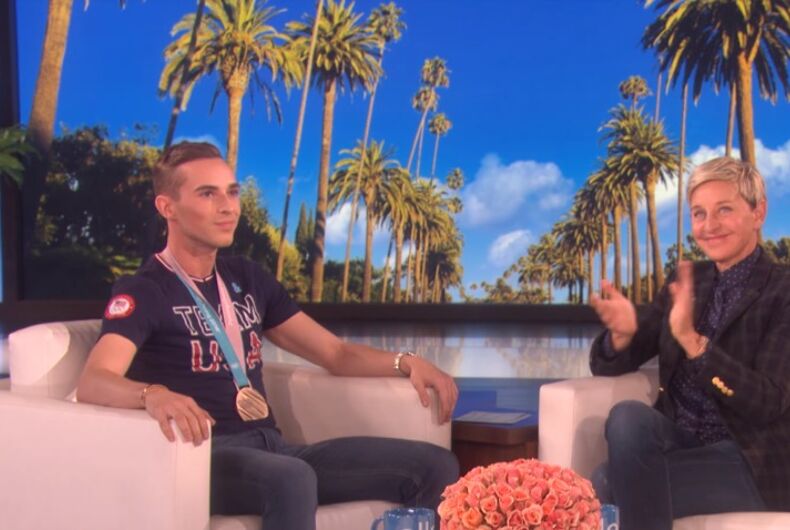 Adam Rippon made an appearance on The Ellen DeGeneres Show and the two hit it off like old pals.

Rippon told Ellen that he was a big fan, and said that being on her show was one of many of his “gold medal moments.” The statement came in response to Ellen asking him his thoughts on so many people saying he should have won the gold with his outstanding performance.

He did admit he felt the judges didn’t take the fact that he’s his mother’s favorite skater into quite enough consideration while scoring.

Rippon is single and offered up his celebrity crushes: Jake Gyllenhaal, and Shawn Mendes, who has replaced Harry Styles.

“I was sleeping on Shawn Mendes,” he told Ellen, explaining he meant he wasn’t paying enough attention to the cuteness the singer was putting out.

“And, like, I know Harry will be upset,” he said, in his America’s sweetheart voice, before following it up with the realization that “love is a funny thing.”

Ellen offered up some solid advice to Rippon in the crush department: Maybe go with queer men who are actually attainable, “that look like them.”

Related: Sally Field is trying to set her son up with Adam Rippon

The pair then moved on to more serious topics, like his ongoing beef with Vice President Mike Pence. Rippon criticized Pence for being anti-LGBTQ and turned down the chance to speak with him before the Olympics, saying he needed to concentrate on the competition.

While Rippon recently said he would now be willing to speak with Pence, as the Games are over, it sounds like he changed his mind. Instead, he thinks Pence should speak to LGBTQ youth instead.

“I have nothing to say to Mike Pence. That’s not a conversation for me,” he said.

“I think going to the Olympics, it’s given me a really great platform to give a voice to people who feel like they don’t have one. So if that call were to happen, I would say, you know what, it’s not for me. It’s for those people who – their lives have been affected and changed by legislation he’s pushed. It’s for them to share their stories and their experiences, it’s not for me,” he added.

That response drew applause from Ellen, who said she hopes Pence will do just that someday.

Speaking of LGBTQ youth, Rippon revealed that he is working with GLAAD’s youth engagement program.

Thank you @Adaripp for raising critical funds for our campus ambassador program: “To have these young kids out there changing the world, this is something that I need to be a part of”

“This is so important, because we’re getting these kids and they’re becoming activists in their community,” he said. “When I was young, to have somebody out there that I could have looked up to, it would have made a world of difference. It would have changed my life.”

The interview ended with the presentation of a giant $100,000 check to go toward those efforts.