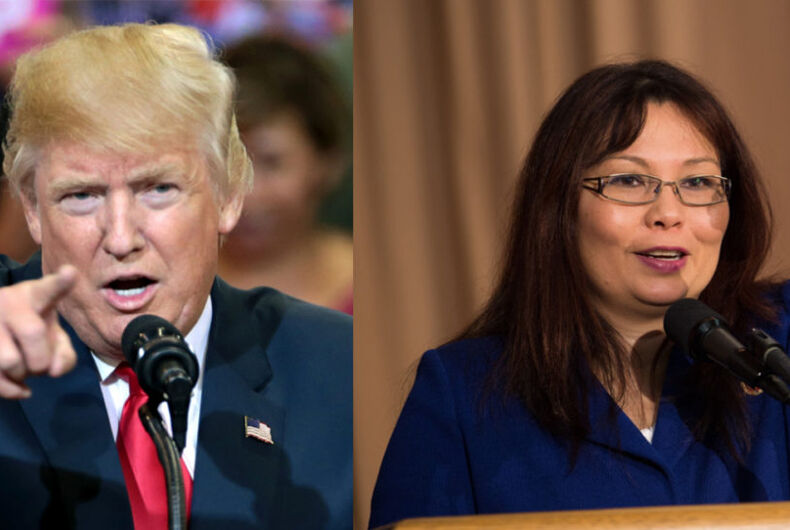 President Trump is calling those who didn't applaud him at the State of the Union unAmerican. Sen. Tammy Duckworth is having none of it. Photo: Trump photo by Gage Skidmore (CC license 2.0)

President Donald Trump had his little giant ego bruised yet again by a routine part of political theater: The opposing party not applauding the sitting president during the State of the Union.

Trump, who at least didn’t have anyone shout, “You lie!” at him, despite his many lies, is apoplectic that everyone wasn’t on their feet, cheering wildly for every utterance out of his mouth. He did his best to make up the deficit by applauding himself throughout the speech, but still, it wasn’t enough for him.

“They would rather see Trump do badly, okay, than our country do well,” he claimed in a speech in Ohio, where he talked up the Republican’s tax break for corporations and the uber wealthy.

“That’s what it means, it’s very selfish,” he continued, before transforming into New Age Trump, saying he couldn’t even stand to look in the direction of all that “bad energy.”

“You’re up there, you’ve got half the room going totally crazy, wild, they loved everything, they want to do something great for our country. And you have the other side, even on positive news, really positive news like [lowered unemployment] they were like death, and un-American, un-American,” he charged.

“Somebody said treasonous,” he added, pointing to the crowd. “I mean, yeah, I guess, why not? You know, can we call that treason? Why not? I mean, they certainly didn’t seem to love our country very much. But you look at that. It’s really very very sad.”

Trump accuses Democrats who didn’t applaud for him at #SOTU of treason.

“Can we call that treason? Why not? I mean, they certainly didn’t seem to love our country very much. But you look at that. It’s really very very sad.” pic.twitter.com/er3AbvCCwR

Leave it to Trump to not understand why you don’t call anything other than unfailing loyalty to the leader treasonous. There’s another word for that: Fascism.

Sen. Tammy Duckworth was quick with a withering, anything but laudatory, response to Trump’s demand for approval.

Duckworth, a retired U.S. Army Lieutenant Colonel and Iraq War veteran who lost both of her legs in battle, reminded him that she didn’t swear an oath “to mindlessly cater to the whims of Cadet Bone Spurs and clap when he demands I clap.”

We don't live in a dictatorship or a monarchy. I swore an oath—in the military and in the Senate—to preserve, protect and defend the Constitution of the United States, not to mindlessly cater to the whims of Cadet Bone Spurs and clap when he demands I clap https://t.co/99gW1yalDl

Trump received five draft deferments, four for college and one for bone spurs in his heels, saving him from being sent to Vietnam.

Duckworth also shared a quote from Theodore Roosevelt, whom she called a better Republican president, “who earned the applause he received.”

Thankfully, there are better quotes from better Republican Presidents. Here’s one from Theodore Roosevelt—a Republican who earned the applause he received—that Trump might want to consider pic.twitter.com/WAhvB23zGJ

How’s that for a thunderous clap?