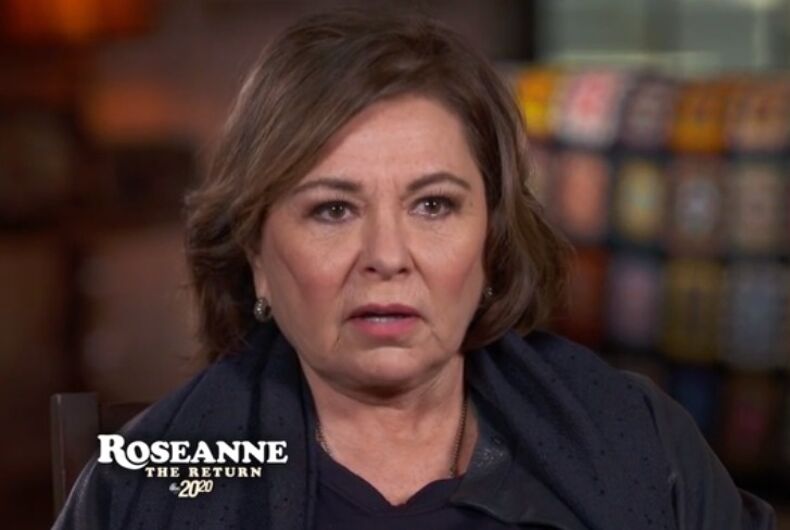 Roseanne Barr is not done talking up President Donald Trump, saying we are lucky to have him as president, because it’s “great for comedy.”

Barr made the comment while speaking with ABC’s 20/20, promoting the Roseanne reboot. The special, Roseanne: The Return, aired last night and can be viewed in full online for cable subscribers.

Not only does her character on the show support Trump, Barr has said that she voted for him, during a liberal bashing tweet storm back in December. She said she did so to “shake up the status quo & the staid establishment.”

Related: Why I won’t be watching the Roseanne reboot & you probably won’t either

“He did talk about jobs,” she said on the show. “That’s what you need to do if you want working people to vote for you, not Syrian airspace. I don’t think Hillary talked about jobs much.”

This matches what Barr argued during a Television Critics Association panel last month, where she came in for hard questioning on her support for the president, that Trump was elected by “working-class people.” This despite the fact that the real unifying factor of his supporters is race. White people across all economic demographics supported him more or less equally.

At that same event, she said that she’s “not a Trump apologist” and that there “are a lot of things he’s done and said that I don’t agree with.”

A reporter asked why her character on the show, who spoke out against bigotry, would be a Trump supporter, calling him a xenophobe.

“That’s your opinion,” she shot back.

She then launched into a debunked conspiracy theory about the Clintons and Haiti, before arguing that she would be a better president than Oprah Winfrey, Susan Sarandon, and possibly even Trump.

To be sure, America needs to laugh, now more than ever. But if Barr keeps talking up Trump she might find her ratings in the toilet before the show has even aired. As it is, the far-right is already up in arms over the inclusion of a gender nonconforming child in the series.

Much like her estimation of the 2016 presidential election, Barr is managing to offend both sides. Whether it will make for TV gold or one of the quickest comeback flops in history will be told in time.

Roseanne will premiere on March 27 on ABC.

Maybe the Florida school shooter was a white supremacist. Maybe not. The threat to us is still real.