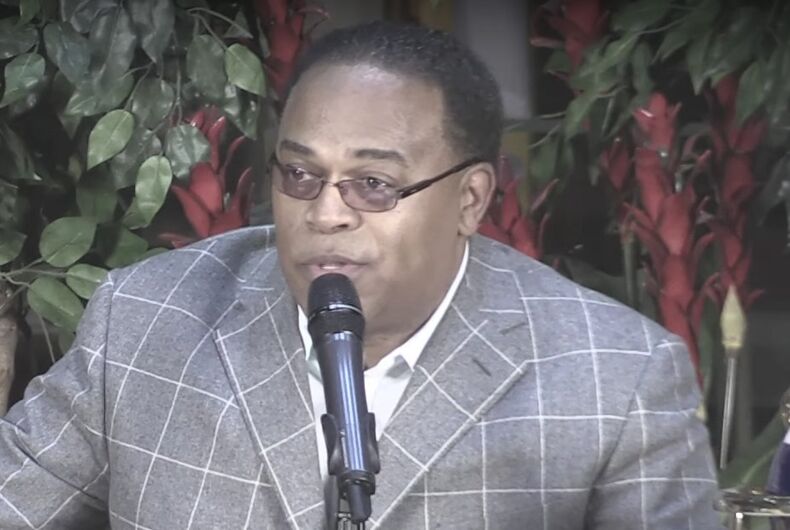 Snyder named Bishop Ira Combs Jr. to the position, a conservative Christian pastor known for his opposition to LGBTQ rights.

In 2000, Combs worked with the American Family Association – an SPLC-designated hate group – to lead a fight against his son’s high school’s Gay-Straight Alliance. He said that he didn’t want “homosexuality forced on his children.”

And last year, Combs was a vocal opponent of an LGBT-inclusive anti-discrimination ordinance in Jackson, Michigan. The city ended up passing it anyway.

Equality Michigan condemned the appointment in a statement. “His twenty-year track record of demonizing and vilifying LGBT Michiganders is embarrassing. It should go without saying that someone so committed to depriving a group of Michiganders of their basic civil rights has no business on the Civil Rights Commission.”

State representative Jeremy Moss, who is gay, said he was strongly opposed to Combs’s appointment. “A person can be fired at work for being gay or transgender in Michigan, and that person can be excluded from housing,” he told the Detroit Free Press. “They can get a call on any day of the week from their landlord and get the boot because they’re gay.”

Combs responded to the criticism by saying that LGBTQ people don’t need civil rights protections because they “are economically advantaged.”

“I think that’s good, but they’re not my focus because they’re not disadvantaged,” he said.

Of course, that’s not the case. Not only are there lots of stories about LGBTQ people facing discrimination at work, in housing, and in public accommodations, the discrimination has been studied and it’s systemic and leads to decreased earnings compared to similarly situated straight men.

It’s the fault of people like Combs that LGBTQ people are disadvantaged, and he has spent decades arguing that we should be disadvantaged.

The Michigan senate is supposed to “advise and consent” the governor on his appointments, but no formal vote will be taken in the Republican-controlled chamber. He will hold the position until December, 2021.

Kentucky state police tweeted a rape joke during the Superbowl

Compare & contrast: Take a look at these two Republican politicians from Illinois