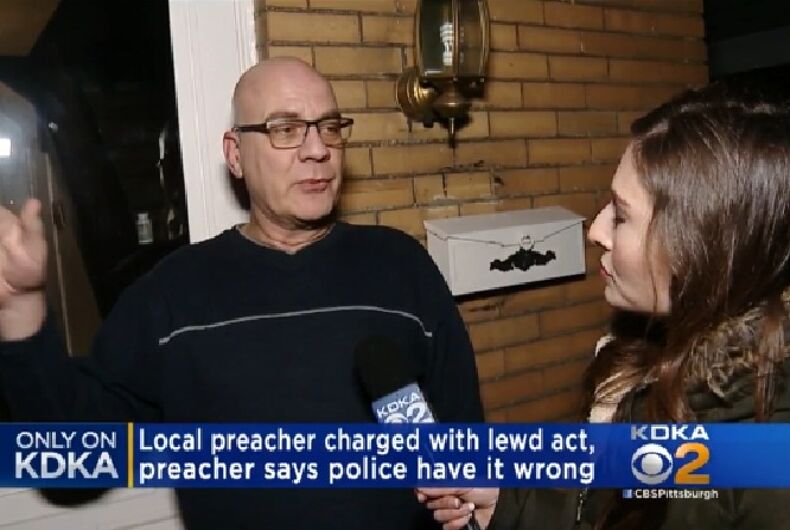 A pastor in Pennsylvania has an interesting explanation as to why he was caught in a car with a naked man who was tied-up with nylon rope in the front seat.

“I was counseling a young man with a drug problem, okay?” Pastor George Gregory, of Waterfront Christian Community Church, told a reporter with the local CBS affiliate. “It did turn strange, but it wasn’t my doing, okay? And I was adamant that, I’m not participating in that way. And so that’s when the police pulled up, and they assume things, but I’m standing by my story. It’s not true.”

“I won’t deny that he began to take his clothes off and propositioned me, but I will deny, on a stack of Bibles with God as my witness, that I did nothing,” he added.

According the criminal complaint, police arrived on the scene following a call from a neighbor who was concerned because the car was parked outside his daughter’s window. He told police he saw the man Gregory was with get out of the vehicle without any clothes on at one point.

Gregory is said to have told officers he and the man “were just playing,” and that they “meet up from time to time to play with each other.” He also allegedly said that he thought he was in a private place. When police corrected him, noting that he was on a public street and well within view of the public, he said, “I know.”

“I have nothing to hide. I did nothing wrong,” he added, claiming that both he and his wife have been trying to get the young man help for a few years.

He also claimed that the only reason police approached the vehicle is because they “thought somebody had passed out or something, that’s what the call was.”