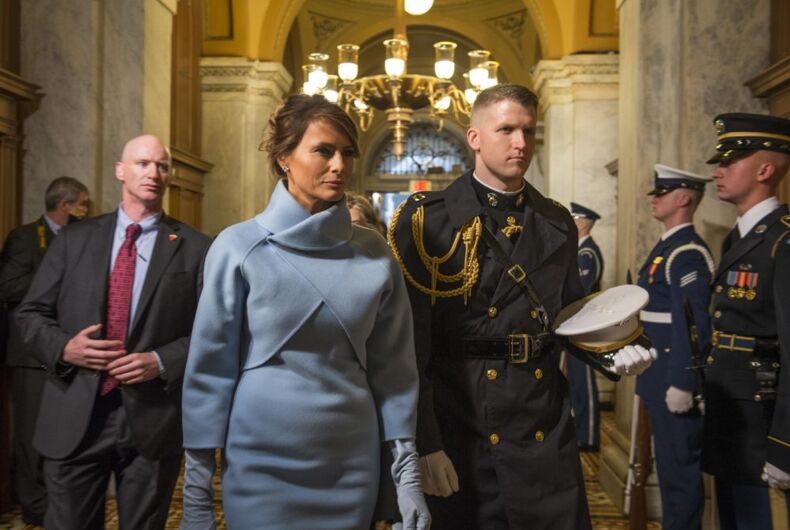 A far-right pastor from Indiana has made the bold, and unsubstantiated, claim that First Lady Melania Trump refused to move into the White House unless it was exorcised first.

“When the president allowed 40 pastors to come into the White House and anoint him with oil and lay their hands and pray on him—seven times he’s done this—that’s unheard of…The guy’s got flaws, we all do, but at least he’s humble enough in recognizing he needs God enough he keeps bringing them in for the prayer,” he claimed.

“And I gotta say this, it might have started with the first lady, I’m gonna just be honest with you,” Begley continued. “The first lady, in that five hours when the Obamas and the Trumps went down to the Capitol and Trump was being sworn in as the 45th president of the United States, Melania Trump said to her husband, ‘I’m not going to go into that White House unless it has been completely exorcised.’”

“Because apparently, over the eight years that Obama was there, and maybe even some of the presidents before him, there was all kinds [sic] of idol gods, and images, and all kinds of artifacts in there that were demonic. Even some of the stuff was left over from the Clinton era, ’cause they were really tied-in with the Haitians…But Melania said, ‘You gotta get all that out of there, and send in some preachers, priests…anyone, go in there and cleanse the White House or I will not spend one night in there.”

“And he did, during that five hours that they’re ripping out carpets and changing drapes, there were people in there packing up every idol, the only thing that was left, Sheila, was one cross on one wall,” he added. “They cleansed the White House, they had people go in and anoint him with oil, praying everywhere.”

Again, all of this is offered with no evidence whatsoever and there’s no reason to believe any of it is accurate. Not that that stopped Begley from spinning the fantastical yarn, and Zilinsky from lapping it up with a “wow!”

He had nothing to say as to why she failed to move in to the White House for months, only doing so in June.

Looking forward to the memories we'll make in our new home! #Movingday pic.twitter.com/R5DtdV1Hnv

Listen to the exchange below, via Right Wing Watch.

God told Michele Bachmann not to run for Senate, but he told a gay man ‘yes’ apparently