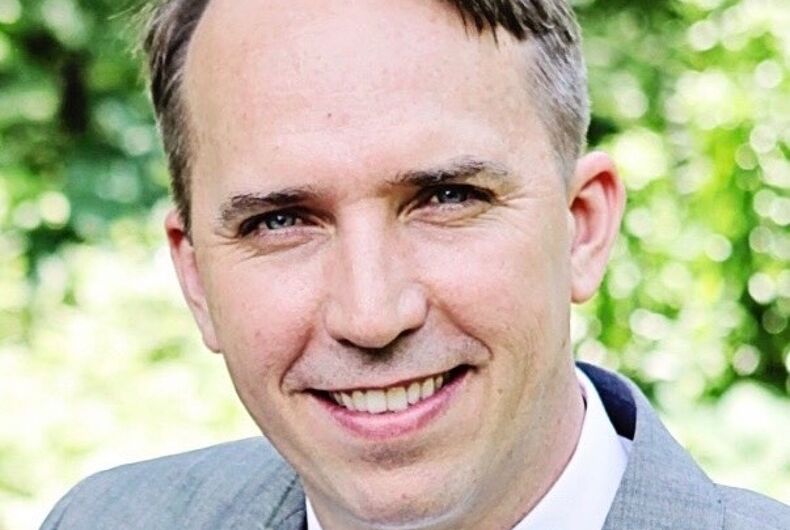 First Michelle Bachmann stepped out of the race to replace former Senator Al Franken, saying God didn’t tell her to run. Then a gay man launched his candidacy in Minnesota’s November election. God apparently has a sense of humor.

On Monday, Democrat Nick Leonard, a Minneapolis attorney and activist, announced his candidacy for the Senate seat of Franken, who resigned in January after accusations of sexual impropriety. Leonard will challenge fellow Democrat Tina Smith, the former lieutenant governor appointed to fill Franken’s seat until the election.

“I am a true Minnesota progressive like Paul Wellstone, except I disagreed with his position on LGBT rights. He did not support same-sex marriage,” Leonard said to LGBTQ Nation. “I have deep Minnesota roots, born and educated here.

“My experience as lifelong out gay man gives me a broader perspective that guides me on legislation and public policy.”

Leonard enters the race after former U.S. Rep. Michele Bachmann, R-Minn., announced she was not running. Bachmann, who represented her House district from 2007-15, had been considering a Senate run. But, on Feb. 3, she told conservative radio host that she didn’t have “any sense from the Lord” that she should run.

One message from above might have been this billboard:

The billboard listed its source as Good Lord Above, a satirical website.

In contrast to Bachmann, Leonard’s campaign stresses his support of Minnesota families.

“I stand ready to help families provide for their children, pass laws to protect the environment and further strengthen our economy so it benefits all Americans,” Leonard said on his campaign site. That includes the student-loan crisis, increased wages, equal pay for equal work, fair taxation and primary health care as a fundamental right.

Leonard is a small-business owner who’s also a former patent attorney, biology teacher and board member and activist for local causes, including the Minnesota AIDS Project and the Gay and Lesbian Amateur Sports Society.

He and his husband, John Mason, married in 2015. They created Kata Organic Café + Fitness Boutique, in the Linden Hills neighborhood, just southwest of downtown Minneapolis.

His lack of experience as a politician only strengthens his candidacy, he told LGBTQ Nation.

“My experience as a lawyer, activist and community organizer over the many years is my greatest advantage,” Leonard said.

“Voters, especially in Minnesota, are looking for a fresh, forward-thinking candidate like myself. Therefore, the fact that I am not part of the political establishment is an advantage.”

Leonard said his experience as a gay man would only help him serve the people he represents.

“Minnesota has an opportunity to elect the first out gay man to the U.S. Senate, and I am very proud to be part of it,” he said.

“I have been out since college and have faced criticism for it ever since — and even many times before coming out,” Leonard said. “Throughout my life, however, I have fought for my and others’ rights, built acceptance and advocated for equality — and I always will.”

Leonard’s opponent runs as an incumbent. Smith, the former lieutenant governor, was recently appointed by Governor Mark Dayton to keep the Senate seat Democratic after Franken’s departure. She was Dayton’s chief of staff before becoming his running mate in 2014.

“I am grassroots,” he said to LGBTQ Nation. “Tina Smith is Establishment. For instance, I question her positions on DACA, the economy and civil rights.”

It will be a busy campaign season in Minnesota, with an open governorship, two open U.S. Senate seats and a number of contested congressional races. The state is typically Democratic, though President Trump made gains there in 2016. Running for her third term in the other Senate seat is Amy Klobuchar, the state’s first elected female U.S. senator and a rising star in national politics.

Smith and Leonard face no opposition from a high-profile Republican, and Tuesday’s turnout in Minnesota’s non-binding causes was overwhelmingly Democratic-Farmer-Labor. DFL is the state’s affiliate with the Democratic Party.

Leonard said his candidacy focuses on the everyday concerns of Minnesota families, but coverage of his announcement mentioned Bachmann. He told LGBTQ Nation, “My biggest concern is the Far Right’s continued efforts to oppress and segregate our community and to propose laws that will retract the rights we have gained.”

“I am anxiously awaiting the decision of the U.S. Supreme Court on the Masterpiece Cakeshop v. Colorado Civil Rights Commission,” Leonard said. “I am adamantly opposed to any laws that allow anyone the ability to discriminate or infringe the rights of others based on any religious beliefs.

Leonard reflected on how his candidacy is historic.

“Minnesota has an opportunity to elect the first out gay man to the U.S. Senate, and I am very proud to be part of it,” he told LGBTQ Nation.

“I have been out since college and have faced criticism for it ever since — and even many times before coming out.

“Throughout my life, however, I have fought for my and others’ rights, built acceptance and advocated for equality — and I always will.”

Did Melania Trump have the White House exorcised before she would move in?