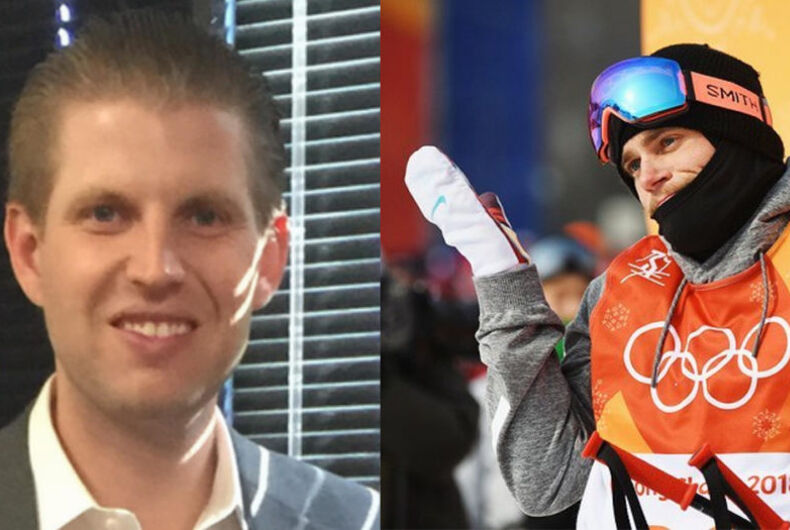 Eric Trump is not pleased with Gus Kenworthy for asking what his sister Ivanka was doing in South KoreaPhoto: Trump photo by Students for Trump (CC license 4.0), Kenworthy photo via Instagram

Eric Trump said he finds it “disgusting” that Gus Kenworthy struck out at Ivanka Trump in a tweet that asked what she was doing at the Olympics during the final weekend of the Games in South Korea.

Related: In historic first, Gus Kenworthy kisses his boyfriend at the Olympics on TV

Kenworthy tweeted that he was “so proud” of everyone who worked so hard to get to the Olympics, ahead of the closing ceremonies, adding, “Well…Everyone except Ivanka. Honestly, tf is she doing here??”

So proud of all these people! Everybody here has worked so hard to make it to the Olympics and have the opportunity to walk in the closing ceremony! Well… Everyone except Ivanka. Honestly, tf is she doing here?? pic.twitter.com/sfJKi0VTDb

Ivanka Trump, who is an official adviser to her father, was in South Korea not only to attend the games, but also to meet with President Moon Jae-in.

The world witnessed the extraordinary stories and successes of hundreds of athletes at this year's #WinterOlympics. The Olympic Closing Ceremony was an amazing tribute to all those that competed at #PyeongChang2018! pic.twitter.com/4LUrl2IKNH

Kenworthy is not the only one who was less than thrilled by her presence in the country. The decision to send her there is causing increased tensions in the White House, with some senior officials objecting, CNN reports.

Related: Gus Kenworthy has a message to those who say homophobia is over: ‘Read the hate I receive.’

Eric Trump appeared on Fox & Friends yesterday, where he was asked his reaction to Kenworthy’s tweet.

“I think it’s disgusting,” he said.

“The Olympics is a time of happiness,” he added. “We did great, we won so many gold medals. Ivanka is an unbelievable representative for this country. She is so poised, she’s so elegant. She’s a role model for so many people.”

“So, to hear that, that’s not what the Olympics is about. Politics should not enter into the Olympics,” he continued.

When asked if it bothered him, “as her brother,” he said that it did.

“Yeah, it does bother me, and it should bother us as a society. Can you imagine if Sasha or Malia [Obama] went over to the Olympics and somebody said that about them?” he added.

Kenworthy also criticized Vice President Mike Pence’s role leading the Team USA delegation, following in the footsteps of his fellow openly gay Olympian, Adam Rippon, in calling into question why someone with anti-LGBTQ views would be chosen to lead a team with three openly gay athletes on it.

Related: Adam Rippon says he is ready to speak with Mike Pence now that the Olympics are over

He joked when he broke his thumb that at least it meant he wouldn’t have to shake Pence’s hand.

Why did it take the disappearance of a white man for arrest of alleged gay serial killer?