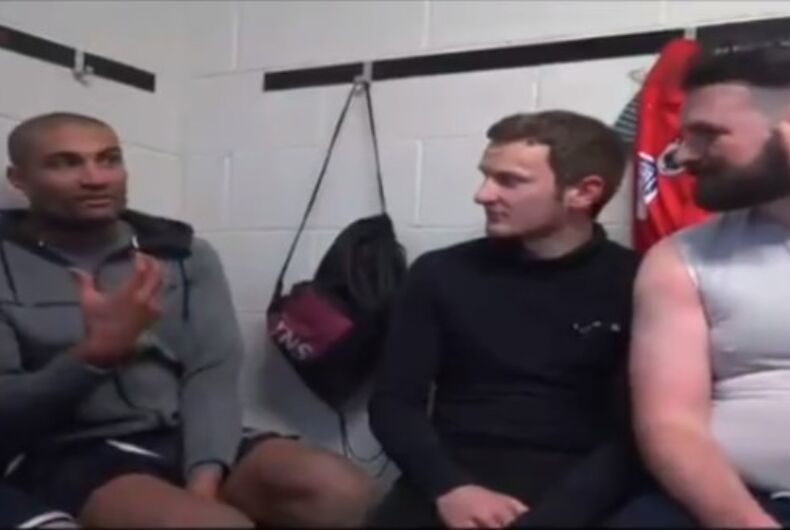 Richie Anderson comes out to his teammates. Photo: Screenshot/Twitter

BBC presenter Richie Anderson was working on a piece about homophobia in sports, but wasn’t out as gay to his Sunday league football club teammates. (Or soccer, as we call it stateside.)

Anderson decided it was time to change that, so he steeled himself against his nerves and filled them in on more of the details of his current project, and in the process revealed more of himself.

He had told them he was working on a special grassroots sports program about soccer, but they were not yet aware of the topic of homophobia.

“I love competing, and I love the banter with my teammates,” Anderson says in the report. “But I’ve got a secret I can no longer keep from them.”

“It’s funny, really, because in every other part of society, I’m out and I’m proud. My friends know, my family know, but as soon as I’m here on a football pitch, it just feels like a taboo,” he says.

“So why am I, and other gay footballers keeping quiet?” he asks. “Well, last year, campaign group Kick It Out received its highest number of reports of abuse across all levels of football, 20 percent of them relating to homophobia. And I often hear homophobic comments whilst I’m playing and whilst I’m watching.”

“There is something about football which has prevented progress in the same way that we’ve seen elsewhere. Now, how to get through that is a very difficult thing to say,” says a player from the LGBTQ friendly team the Birmingham Blaze.

Coming out to his team

Finally, Anderson could put it off no longer and sat down with his team after a game to come out as gay.

He says his nerves are calmed somewhat by scoring a goal in his team’s 7-2 win, but it is obvious that he is still struggling to find the words as he speaks his truth and hopes for acceptance.

“One of the big issues we’ve looked at this week,” he says, hesitating but pushing through, “it’s really close to my heart, is homophobia in football.”

“And the reason that means a lot to me, is I’m a gay footballer,” he says. “So, I just wanted to be kind of open and honest because with you lot, it’s just been class.”

He admits that it was hard for him to come out, prompting his team to break out in applause, letting him know that he was accepted.

“Seriously, thank you, that means a lot,” he tells them, growing emotional.

“There’s going to be absolutely no difference whatsoever. Rich is Rich. Doesn’t matter who you are, what color, what race, what sexuality you are. You’re a player for this team, and that’s it,” says one of his fellow teammates.

“It probably doesn’t mean as much to us as it does to him,” says another. “So I’m really proud of him to be able to come out and say what he said, and for the lads to be as supportive as they were.”

Anderson says at the end of the report that he expected a good reaction, but that he was still “so relieved.” He adds that he hopes others can use his experience as inspiration to come out to others as well.

Footballer @richie_anderson has never come across an ‘out’ player at #SundayLeague level. He now believes it's time for himself to tell the rest of his teammates at Coombs Wood F.C. that he’s gay. #Football pic.twitter.com/2xQ3svN1hO

Watch the full report below.